Imagine being 16 years old and in love with a team sport like basketball. Then one day you’re running down the court, teammates cheering, going in for a layup, and the next minute you’re on the floor with a twisted ankle gasping in pain.

The coach calls you off the court and you limp toward the bench, ankle swelling up like crazy. Coach says it should be checked out so you go to a doctor and learn you’ve sprained your ankle. The doctor explains you tore a ligament and you need to wear a foot brace, or “bootie” as they’re sometimes called.

For the next couple of weeks, you hobble around with your foot immobilized, unable to go back to basketball. Then your doctor takes it off and prescribes that you go to PT. You do six or eight sessions to get walking again. When those are finished you still have pain in your ankle and you can’t move it like you could before the injury.

Maybe worst of all, you’re now afraid to get back in the game. Your beloved sport doesn’t seem so fun anymore.

Yet the doctor doesn’t have anything else to offer you by way of sports injury rehab or education. The general message is that you should be able to just give it time to get back to normal. But how can you get back to normal when you’re still in pain, you feel like you can’t trust your body, and your confidence is shot?

This is the moment when the work of Sandy Gross comes into play. For many people, especially teens and young adults, there’s “a gap in education” when it comes to human movement. Sandy’s work aims to fill that gap. 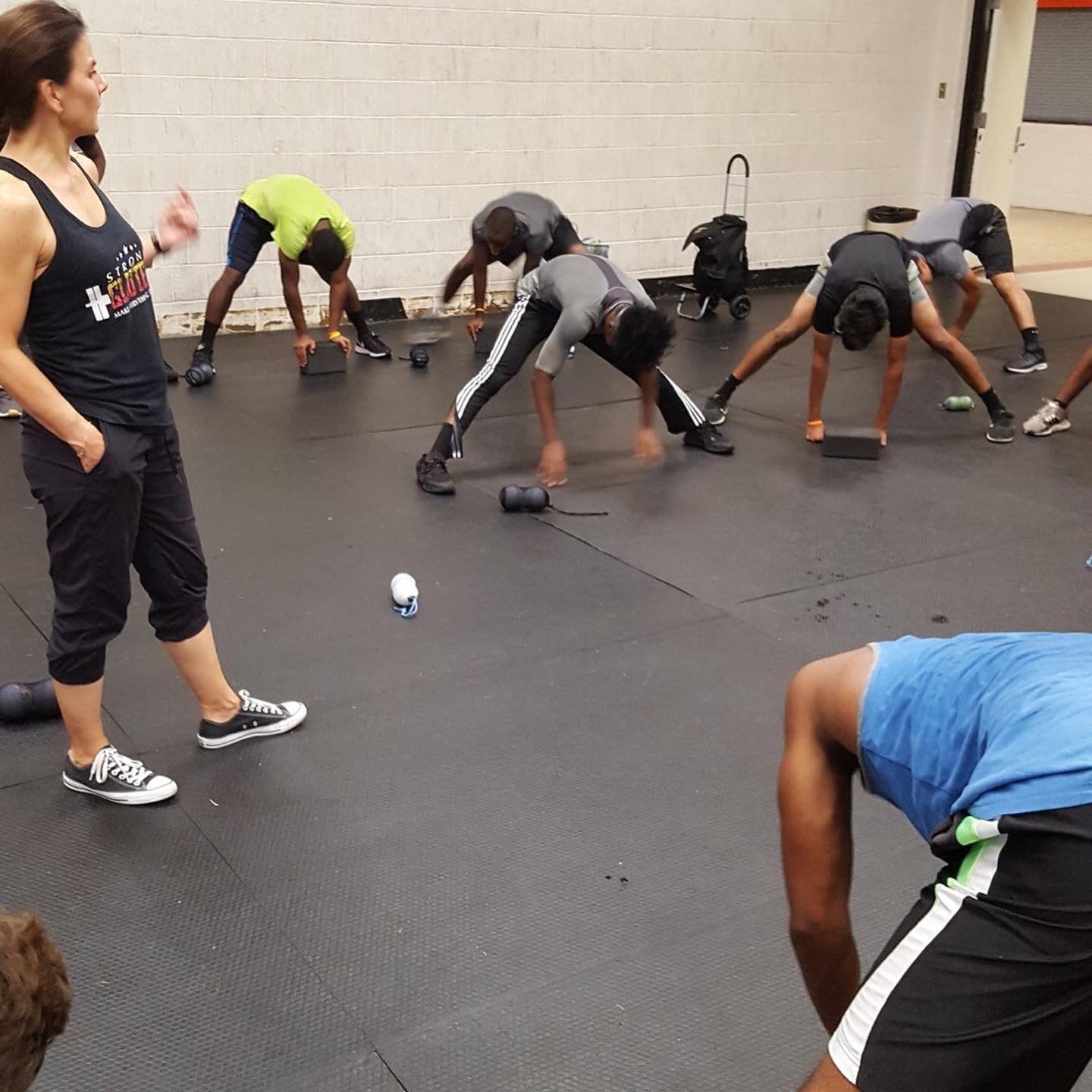 Filling the Gap in Movement Education

“There is more musculoskeletal pain and dysfunction from exercisers than from non-exercisers. Which means that exercise is actually a risk factor for health. Not for fitness–people get fitter from exercises–but for health,” shared Sandy in a recent conversation.

“When I heard this alarming statistic from Gray Cook,” she went on, “it never left me. That’s really what spurred me on and inspired me to work with teens and families who want the education process.”

Sandy respects the high school coaches that wear many hats–often teaching academic subjects by day and coaching sports after school hours. She knows they do their best to “warm up” the young athletes–often with traditional PE practices like jogging, high kicks down the field, and high knee jogs.

However, “movement preparation (and recovery) is much more sophisticated in college and professional sports now” Sandy explains. Many of those teens are suffering the consequences of sport specific drills, without being educated in the fundamentals of functional human movement that underlies each jump, kick, and swing. 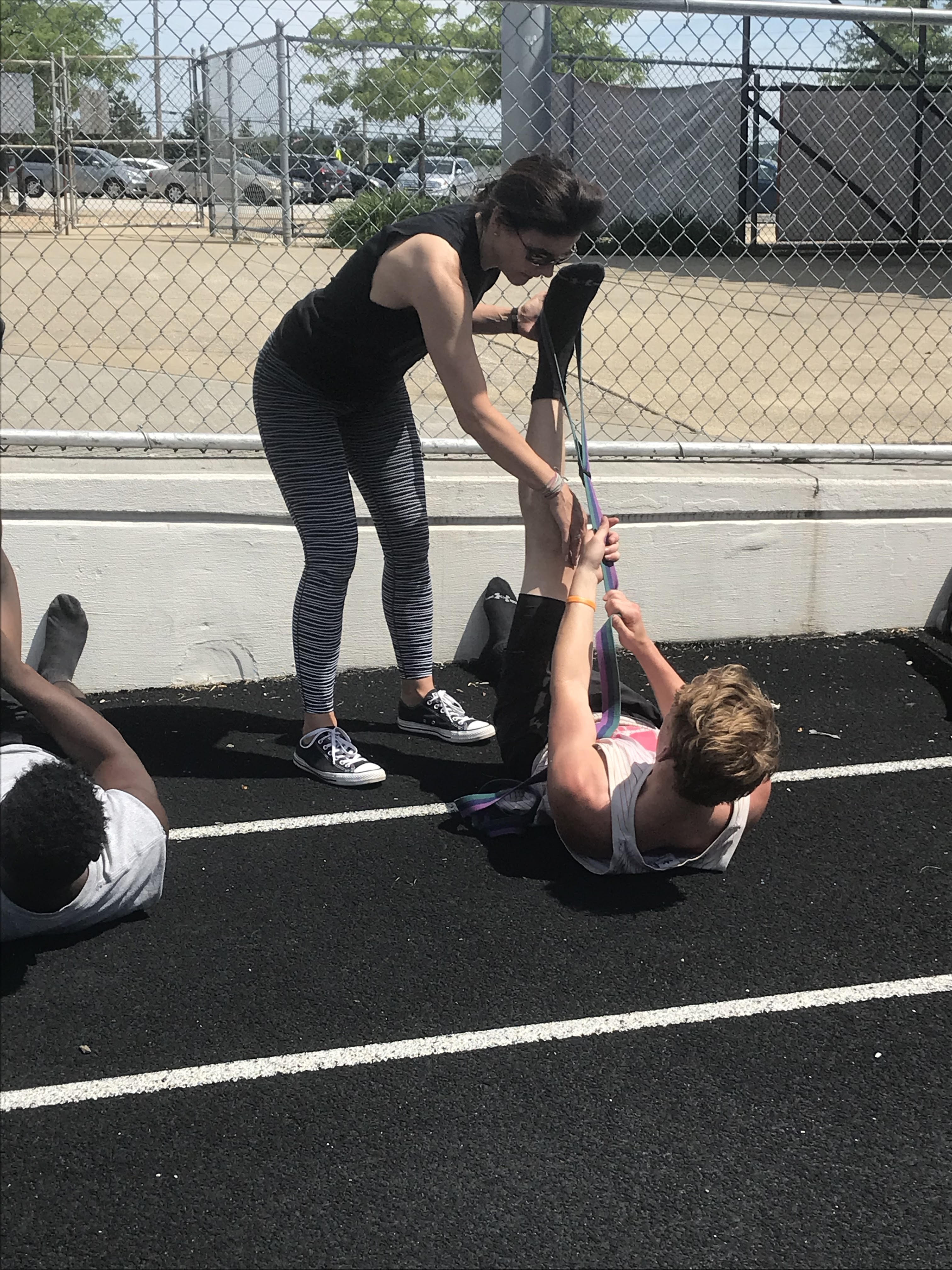 “Physical education has been put aside,” says Sandy. “PE is more geared toward fitness and activity. Movement and play are super important but the education needs to be put back into Physical Education class.”

Sandy started out as a teen athlete herself, favoring soccer and swimming. Years later, when she owned a yoga studio, a coach of Kent State University’s D1 (Ohio) women’s basketball team came by seeking stretch and regeneration exercises for the players.

That led to educating the team in both regen practices and human movement. Which led to men’s basketball. Then on to other group fitness regeneration and functional movement coaching, including a local high school.

At this point, Sandy has a pretty solid system in place to educate young athletes on the underpinnings of human movement and empowering them to do their own work to take care of their bodies.

The Physical Challenges of a Teen Athlete

The main “problem areas” for teen athletes that Sandy comes across are tight hamstrings, feet and ankle issues that have been deconditioned from injury or inactivity. She is also mitigating the effects of student life–which is a lot of sitting.

The reason teens have issues in these areas, in Sandy’s experience, is a combination of things.

“Sometimes it’s a young man who is growing fast that’s causing pulling on the hamstrings. Or not enough time is taken for movement prep. Or the ‘warmups’ are not specifically prepping the nervous system within the whole system. The nervous system is what grants permission for strength, power, and mobility. The mind/body connection during warm-up is key as it prepares the brain and body for movement.”

“If a student is sitting for more than six hours in a day they are considered sedentary. One to three hours of practice doesn’t undo the job that sitting does on their bodies.

“Like a computer screen that goes black, their brain-to-glute/hamstring connections go dark from being seat cushions instead of primary movers. Then when they get up and go practice, if they don’t do specific movement prep, the spine, knees & ankles will compensate.”

She continues, “I believe more conscious prep where the students learn how their body connects, disconnects and reconnects itself is the key.”

Solutions to Fill the Education Gap for Young Athletes

Sandy’s physical education for young athletes starts with what she calls establishing your “basecamp” by teaching how to breathe from the respiratory diaphragm–including showing it on a 3-D anatomy app. (See below “Activate the Tubular Core” video for more on this.)

Following is rebooting the mind/body connection with ground-based movement and learning about “movement hygiene” for the primary joints such as ankles, knees, hips, and shoulders.

She also teaches them to see the seven most fundamental human movement patterns within everything they do: the hip hinge, squatting, pushing, pulling, rotating/de-rotating, carrying heavy things in each hand (the loaded carry/farmers walk).

Her work is yoga-inspired but Kent’s coaches introduced her to their athletes as a “regen” coach, recognizing that her work is so much more than yoga.

For example, Sandy teaches Roll Model® Method therapy ball work for targeted stretching and myofascial release. She also teaches corrective exercises from her work with Gray Cook’s FMS, a physical therapist-designed program that is well known in the professional and D1 college systems. 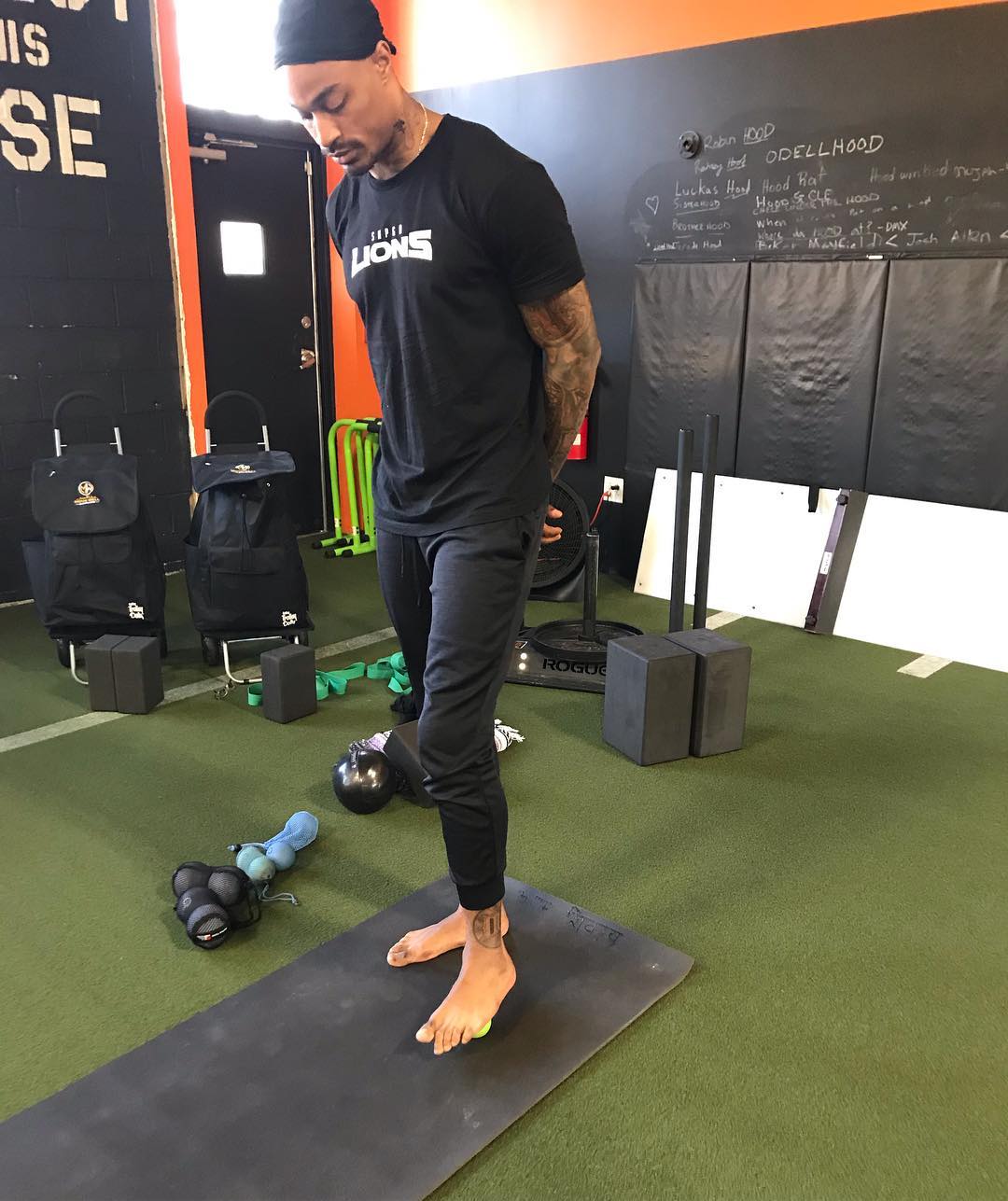 “The young athletes generally have lightbulb moments right away,” says Sandy. “When students learn and practice the underpinnings of the actions they’re taking–breathing, bracing the spine, and the movement patterns–how a rolling pattern leads to catching the ball coming from behind you; or how owning the hip hinge leads to a powerful kick; or how derotation relates to a split second decision to escape or survive a tackle, they’re empowered.

“Building greater neuromuscular control leads to a more real and resilient toughness through the embodied confidence they’ve developed from having this deeper vision of themselves in motion.”

On the field, the “goal” can override the physical sense of self, which can make teens more vulnerable to injury. “But with my educational approach to movement prep, the physical sense of self is the goal. Developing the self-knowledge of moving well sets athletes up and also makes athletes more coachable–coaching cues land better because they know their bodies better.”

This bears repeating: “Your nervous system rules the roost. Building greater strength and developing mobility isn’t about repetition, it’s about access. When this mind/body connection is made obvious as a skill you can cultivate, you process information better, your coordination improves and new levels of strength, power, and mobility are unleashed.

“That’s what gives the young athlete this embodied confidence and takes performance to the next level. Moving well also prevents injury.”

Movement Prep is For Everyone

While Sandy’s work is making a difference for student-athletes, the need for movement education is not limited to this age group. “The self-knowledge of moving well is essential,” says Sandy. These skills are sought after by recreational athletes of all ages.

Her current client roster ranges from ages 6-79 and includes a young gymnast with post-therapy movement dysfunction and fear, strength coaches who want to know more to help their athletes, young professionals, and retired athletes.

Sandy continues, “A Porsche salesman once said to me, ‘this car is far more capable than you are as its driver.’ This is also true for the human machine: it’s about education. Ultimately, sports performance is human performance.”

To get a taste for how education can be threaded throughout movement prep, have a look at the sports injury prevention practices below. The first is an ankle self-myofascial massage. The second is a practice learning to breathe with the respiratory diaphragm, then create a “breath brace” similar to what Sandy teaches her young athletes.

Related Article: How to Slow Down to Restore Full Power

Learn more about our Therapy Ball Products and Programs

Creativity in Motion: How to Move Like a Dancer

Nearly Naked and Stronger Than Ever: How Pole Fitness Transformed My Yoga Practice

I absolutely love this post! I am a USA certified swim coach, currently working on my YTU certification. The motivation behind my wanting to become YTU certified is to educate my student athletes on how they can better prepare their bodies for a swim as well as how to recover. They often point to a body part and ask me, “how can I stretch this?”. I want to feel confident in helping my swimmers stretch in a responsible way. Thanks for this post!

Sandy, this continues to inspire me to keep on this movement and recovery journey! The reminder that we need to prepare the nervous system was so well said!

“The education needs to be put back into physical education.” Yes! Sandy’s work is so inspiring!! I loved attending her Roll & Release workshop earlier this year as well as the Yoga Tune Up training she hosted a few weeks ago. When I was a young athlete in high school, I faced a hip injury with no guidance on what to do next from my coaches. My tennis career was over, and it sent me down a path of depression with many unanswered questions. Now, looking back I realize that there could have been multiple factors contributing to it and… Read more »

So much juice in this article Sandy! Love, Love Love the education of movement prep as I fear it is highly disregarded across the board! The comparison to the Porsche is brilliant in showing that we DO have tons of potential in our body and learning it is critical! A reminder that fitness and exercise are also risks is definitely worth taking note of, as so many come to a fitness environment with the ‘Push through Pain” mentality.

I loved this” teens suffering the consequences of sport-specific drills without being educated in fundamentals.” I agree with this 100%. Phys. ed is not always taught by qualified people, and the basics are not always taught. Lots of people are moving people through a variety of movements and practices and may not be doing so with purpose.

I’m so appreciative of the yoga teachers pioneering this work, like Sandy Gross who delves into care for athletes. She has the tools and critical thinking to work with them on many levels. I believe self-care has to start at the high school level maybe even earlier now that mental health and anxiety has reached greater. This article summarizes everything a parent of a high school/college athlete should read to support their athlete and beyond (if they are exceptional enough to play at the professional level). Sandy is the best at the regen game!! Thanks for your support!

I liked this article. We must transmit this knowledge to elementary and high school students as a must to integrate into healthy lifestyle habits. Yes to education in physical preparation at all levels and all clients.