Injury to Innovation Part I: Injury

The nurse undid the velcro straps and put the knee high walker boot on. Minimal to no driving, sit as much as possible, and more tests to make sure there isn’t nerve damage. My first steps were slow and difficult. “Wow, that’s gotta hurt,” says a stranger in the hall.

As I had driven to my appointment, I unbooted and put on my regular shoe. No movement and no driving. It felt like my world had caved in on itself.

Two weeks went by and there still wasn’t any improvement. No anti-inflammatory nor boot was helping my situation. I came out to my car and collapsed onto my steering wheel. I am movement educator who can’t really move and didn’t have the answers to what was going on. I was in the pain cave and couldn’t find my way out.

Test after test showed nothing. Finally, I was in PT after a month of barely walking. I was diagnosed with tarsal tunnel syndrome. My big toe could not point which made walking and driving difficult. And the process began.

Funny thing…it looked a bit like Yoga Tune Up®! I was awakening my underused muscles (hello gluteal muscles), playing with direction of movement (flexion and inversion/eversion of the foot), and getting some soft tissue work with something that made the therapy balls seem kind. There were also new things like the laser therapy and KT tape.

Giving the boot the boot with a little flexion and eversion.

One month out, I was finally able to walk around the grocery with help of the grocery cart.  Two months later (with KT tape on), I hiked eight miles (albeit slowly) and enjoyed the beauty of Joshua Tree.  One year out, I’m still learning. I’ve progressed but still finding things that precipitated my injury.

I’ve drafted a list of the lessons I’ve learned throughout my healing process. Stay tuned to the blog next week! 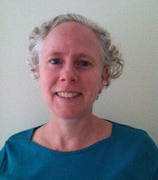 Amalea Fisher is a certified Yoga Tune Up® instructor. She started practicing YTU after experiencing debilitating neck pain and it had an immediate impact when nothing else worked. 2013 found Amalea fresh off a serious illness where could not practice Yoga Tune Up® for some time. This was a reminder for her how essential YTU was to her well being and motivated Amalea to follow her dream of sharing Yoga Tune Up® with others. Amalea wants to help everyone achieve a better body within a therapeutic yoga setting.

I’m always amazed to hear about the body connections that are illuminated through injury. It’s encouraging to know that the recovery road quickly follows an accurate diagnosis.

A true testimony to the need for constant work and that results to healing can and will take time. In my class I realized my weak glutes were the cause to my hip flexor pain. Since YTU I have worked hard to strengthen where I’m weak and I am seeing a huge difference in my quality of life and overall mindset.

My knee injury led me to yoga when nothing else was working to heal it for 4 years. Yoga definitely helped to strengthen my lower body, but I needed something more to loosen what years of no movement and over-compensation did to stiffen it. Yoga Tune Up poses, Balls and movement have definitely improved my healing even more, but I have a long way to go. It’s stories like these that inspire me to keep working on healing myself and not only being creative, but listening and knowing what my body needs to heal. Through my own experience, I hope… Read more »

I recently guided a fellow employee on how to use YTU balls to gain mobility. He had surgery on his heel, they shaved off some bone and had been in a foot cast for a month. when the took it off he walked in shuffles. He has Gorton improved ankle flexibility and is hie doing his own self care daily.

After my first day of the YTU teacher training (which was today) I see more clearly how my own injuries have led me to be creative in healing myself.
After having lower back pain for some time now and using my creativity (therapy balls & movement) I know now that if I can heal myself I can also heal others.
Thank you for inspiring me!

Thank you Amalea, it’s amazing how the body is inter-connected!
I am a runner and I use often the YTU balls for prevent injuries mostly my feet

I suffered a pretty massive ankle injury in 2014 on the 4th day of a 3 week trek in the Himalayas while jumping over a river and landing full force on my right foot which immediately everted. It was bad. Couldn’t walk for 2 days (rode a horse), but then just hobbled on it for the next 14 days after wrapping it and popping a bunch of ibuprofen. Not the best healing plan. I was limited to limping for the next few months. Really struggled with yoga and I hadn’t yet come across YTU, so didn’t really know much self… Read more »

Amalea, it’s inspiring to hear your story! I have also healed foot pain and I am will definitely incorporate your suggestions to take the healing to the next level, especially focusing on inverson and eversion!

The human body is so incredibly complex that we are always learning about ourselves. Even when we think we should know what the issue is, or at least be able to find it we may be so far off that without outside help it may never be solved. I recently had an issue like this after a slip when squatting and struggled to be able to find an answer to what was causing my pain. No matter how in tune we are with our bodies, we are always learning and adapting, not just mentally but physically also. So what feels… Read more »

This is my greatest fear as a fitness instructor to wear myself out one day without being able to help myself or pinpoint the problem.