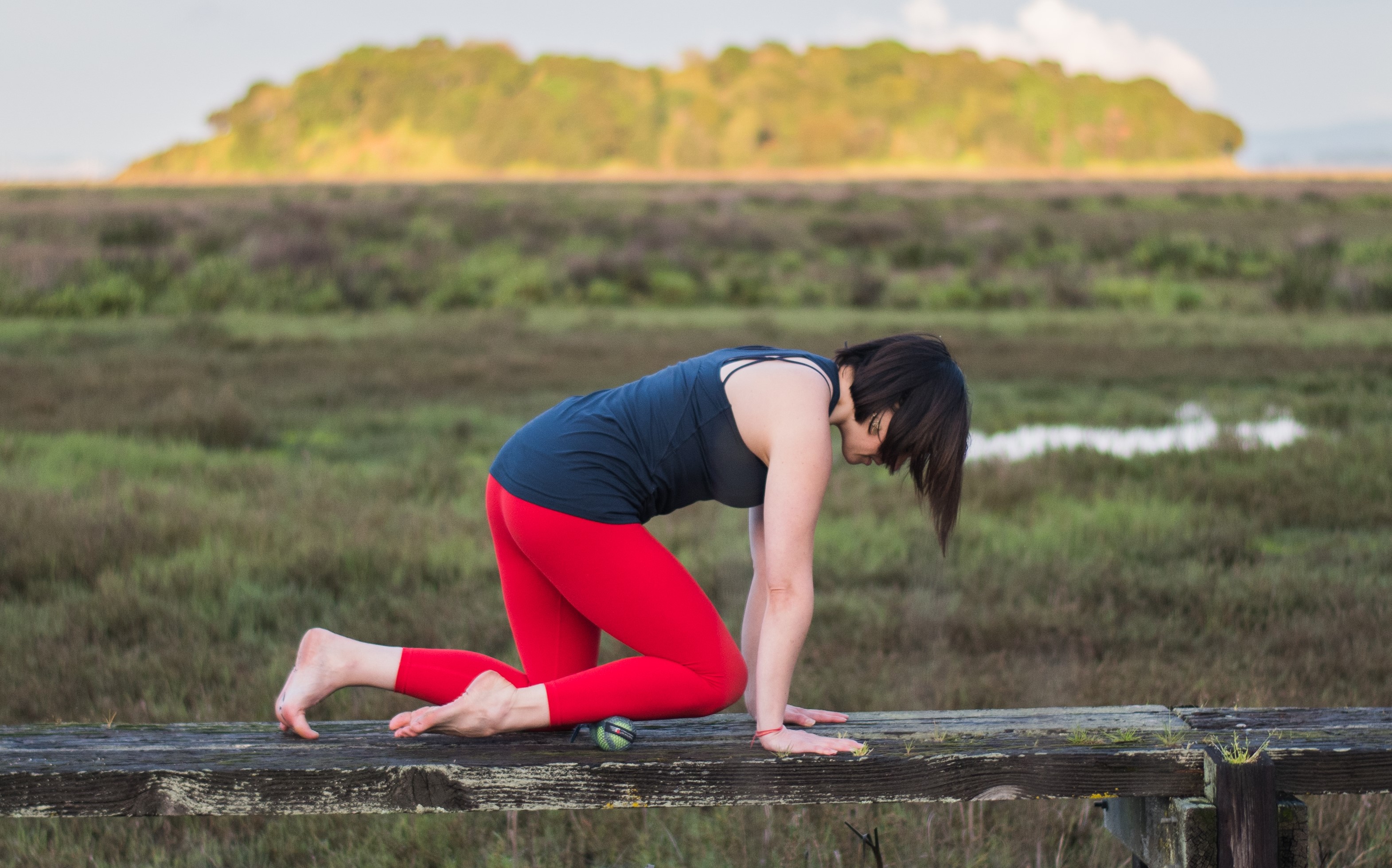 When it comes to myofascial self-massage, less (pressure) is more.

Beyond the element of safety precaution discussed in part 1 , it is better to default to soft tools because, as counterproductive as it seems, more pressure does not always equal more of the changes you’re seeking.

You may be surprised how effective a soft object can be against a hard or semi-hard body part. Not only can soft objects work on “stiff tissues,” but often times they work even better than hard objects.

In fact, research actually suggests that softer tools are about twice as effective as harder ones for impacting connective tissue. Rolfer and fellow YTU instructor Brooke Thomas summarizes this study well in her Breaking Muscle article Yoga Tune Up® Therapy Balls vs. Lacrosse Balls vs. Foam Rollers.

“At the Fascia Research Congress, Leonid Blyum presented a study in which he utilized engineering principals to test out how different mechanical stress transfer mediums (i.e. tools of varying hardness and softness) would affect human tissue. The result of the study showed that softer implements impacted the connective tissue about twice as effectively as the harder implements. (If you read Blyum’s study, note then when he mentions “rubber” as a hard tool, he was using hard tire rubber, not springy responsive rubber.)” 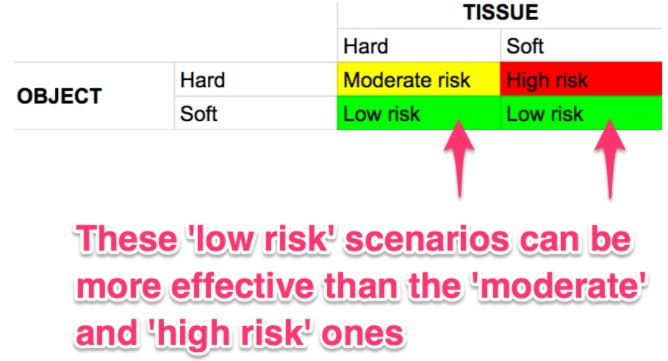 From personal experience and as evident from this study, soft myofascial release tools can work to cause desirable changes in tissues, especially when combined with movement, breath control, hydration, and other factors. Why, in this case, is less more effective?

There isn’t a consensus among researchers and professionals in this field as to how and why a lot of fascia-stuff works, but one aspect many would agree to be part of the equation is the nervous system.

The tissues we’re trying to affect are, themselves, soft. To follow the screw analogy from part two, your “stiff quadriceps” or the “tight knot” in-between your shoulder blades are more like plastic screws than metal ones. Just because they’re screwed in tightly doesn’t mean you need a super-hard steel-forged screwdriver to loosen it. Even when your muscles feel “rock hard,” remember that they’re still classified as soft tissue for a reason.

If I punch you (I promise I won’t), you will flinch. If I pretend to punch you, you will also flinch. Even if I only poke you, or just touch you with the pointed tip of my finger, your muscles will likely tighten up. This is what I personally call the intruder alert.

Rather than pretending to understand the complicated anatomical and biomechanical science of this, I will share an anecdotal explanation that has helped me and my students understand this phenomenon in an experiential way.

Your body (via the nervous system) senses that there is an abnormal presence, a foreign object entering the premises, so it attempts to fortify its defense systems, so to speak. For example, if you’re about to be hit in the gut: you want your abdominal muscles to harden so they can protect your internal organs from the incoming object.

When you’re being massaged, something similar happens. Sometimes, when you’re not expecting to be touched, it’s the fast-twitch knee-jerk reaction of someone being punched, a visible intruder alert like slamming the door when you see an invader coming. 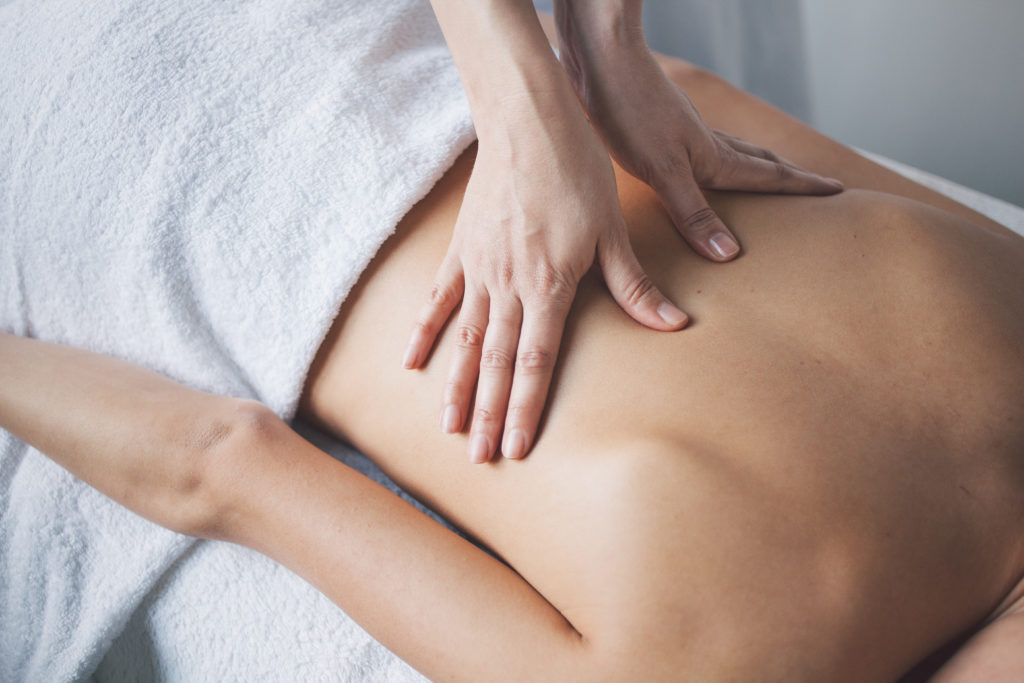 Often times, however, it’s not such a dramatic response, but more like the door is already closed and you lock to door to make sure it stays closed. This is more like what happens when you’re poked or massaged with too much force.

Whether by an instrument of your choosing or someone else’s hands/elbows/feet/etc, when something presses against your body, your nervous system responds. In order for our tissues to yield to foreign objects, there cannot be muscular bracing, whereby the signals from the nervous system prevent the muscle from relaxing, or even cause muscular contraction, as a defense mechanism.

In essence, soft tools are more likely to signal to the body something like “Okay this feels good and is not too invasive… our nerves don’t seem like they’re in danger of being pinched… our muscles don’t feel like they’re going to be bruised… alright let’s open the doors and let our guests in…” This is what happens when the parasympathic (aka rest and digest) part of our nervous system is dominant. 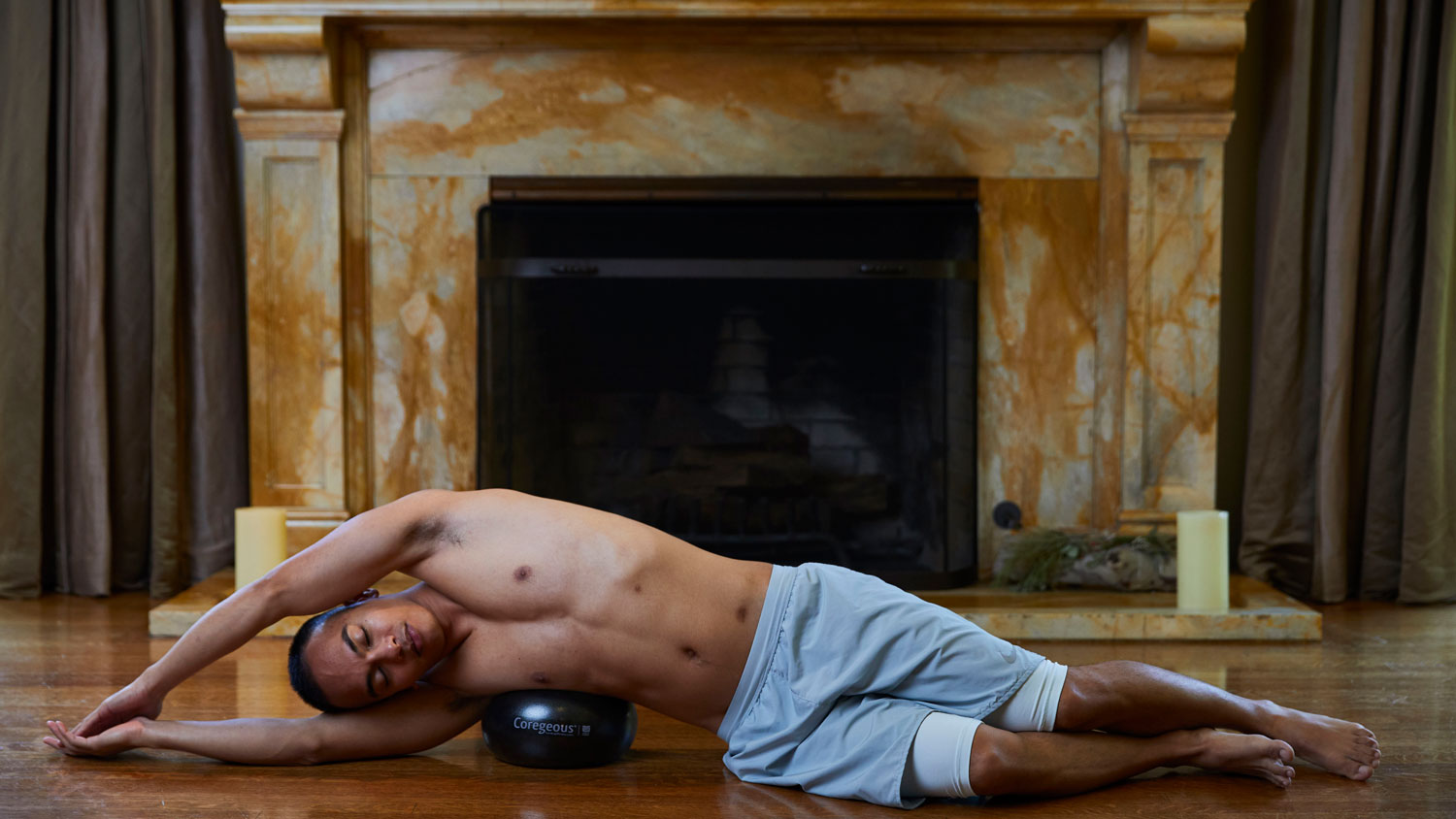 It’s like deciding whether or not to let a guest into your home when they’re standing at the door. A “BANG! BANG! BANG! Let me in!” isn’t likely to receive a warm welcome. Rather, it activates the sympathetic (aka fight or flight) part of the nervous system.

A friendly and polite knock is much more likely to get your foot in the door.

Liked this article? Read Abdominal Massage: What do You Store in Your Core? 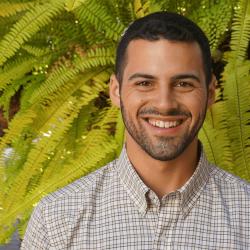 As a competitive high school athlete, Max developed several chronic over-use injuries that left him on the sidelines for his senior year. His journey of fixing these injuries over the past 6 years has taught him the value in integrating one's movement practice -- be it sports, yoga, or any other kind of exercise -- with body work. He has developed a passion for self-myofascial release and its therapeutic effects, especially in combination with strategic stretching, correct posture, and a balanced lifestyle. Max completed his 200-hour Yoga Teacher Training through YogaWorks while at school at UC Santa Barbara in spring 2013, and is now combining his athletic background with his knowledge of yoga, Yoga Tune Up®, and embodied anatomy.

Fun and Effective Moves to Improve Lateral Strength and Mobility

Painting Your Nooks and Crannies

Working as a Sports Acupuncturist & Registered Massage Therapist (with mostly athletes) it amazes me that their mentality is more pressure (pain) = better results. I love your “Truder alert” analogy. My experience working with athletes is that they are more sympathetic dominant so it makes sense to be gentler when working with their body (soft tissue) in order to calm their nervous system down. That along with being mindful about breath control, hydration, adequate sleep and good nutrition helps with faster recovery and better performance.

This article makes great sense , and I can attest the fact that I have tried rolling on harder surfaces versus softer and the results are way better with not so invasive surfaces

I love this article and it makes a lot of sense. I already have been recognizing that some students need the wall or softer tune up balls. It doesn’t, nor should it hurt.
Thank you.

This makes a lot of sense. Especially as a new YTU instructor, I am positive I will have students who ask if they can use harder objects, and also ask if it should hurt more to be more effective. Thank you!

It seems like it’s standard protocol for body workers to ask – is this pressure okay? Even if you see the same person many times over many years the question is relevant for every session. I find with the ball work I need to ask my tissues that same question again and again – is this pressure okay? And if a certain spot seems to require a harder amount of pressure to go in slowly to avoid that nervous system response.

Its amazing how the difference of touch can affect the nervous system. This shows how important it is to remind clients that smashing tissue isn’t the answer, but more so what sensations they feel when they allow something softer meld into their tissues.

I have really been enjoying you posts! I really agree with you and think people may underestimate the degree to which their body has a reaction to ‘intruders’. I find I have to see this regularly in my class. If you go too hard your body an push back to protect itself and you may not be getting all the benefits you could be getting if you only went a little softer.

Thanks Max your analogies are really helpful. I think what you’re saying is especially true when you are working with muscles that are already in pain.

I’ve been arguing with a friend for ages about his use of lacrosse balls instead of YTU balls, but I haven’t been able to articulate the reasoning anywhere near as well as you have here. I’m definitely passing this along, thanks!

interesting idea that the tissue react via muscular bracing as a defense mechanism to protect itself – will try out some softer tools myself to see if the body is more welcoming.

Okay, this information is incredibly valuable to a “no pain no gain” mindset! It serves as a reminder to treat ourselves with a gentle patience, rather than trying to force results. Your chart is simple but made a real impact. Thanks!

As someone who goes for the hard lacrosse ball first, this is nice to read and I am interested in experimenting with softer tools and a more gentle approach rather than sudden and forceful pressure all the time. Thanks!

I can definitely see how hard instruments would affect our soft tissues. It doesn’t have to be “no pain, no gain”.

Thanks for this article, Max. This is something I’ve been thinking about recently after attending at Thai Yoga Massage Training and feeling rather beat up instead of relaxed and also after working with a cold acuball and finding that I was more tense after using it. Although the cold acuball has worked in the past, it goes to show that starting even gentler and softer can be a more productive approach.

As an elite athlete my general thinking was “the more it hurts/the harder the pressure, the more it is working”. Looking back on this now it makes sense that your body recognizes it as an “intruder alert” and your nervous system tries to protect your body. This is very eye opening to now realize that fighting “tightness” with the tightness that your body will react with to hard pressure does not accomplish what you are hoping for. Softening makes much more sense to tell your body to basically be open to the pressure.

As an elite athlete I have always assumed that “the more it hurts, the more it is working”. This is an eye opening article for me to understand that with applying such intense and hard force my nervous system is essentially fighting what I am trying to do by going into “intruder mode”. Fighting “tightness” with our body tensing up and “tightening” from the hard force truly doesn’t make much sense when you understand the way your nervous system and your muscles react.

Thank you for this article Max! It is big game changer 🙂 It is a guideline for changing the perspective of healing or stimulating the soft tissues.

I can so relate to this! It is all about creating the safe space for your nervous system so you can actually get somewhere in your fascia and tissues. Like everything in life these days…less is so much more!

I start my tigger points release with the yoga tune up ball and never compare to a hard tool until recently. The experience with the hard lacrosse ball made me realized the difference of the tune up ball and hard tool. Felt bit up by the hard tool with the same regular sequence of self care and I swear I will bring my own ball on next trip.

Using soft resources to help alleviate the tension we experience in our muscles makes a lot of sense. Given that its activating the parasympathetic nervous system, our muscles are more receptive to this foreign tool and open up, essentially allowing for more openness and relief of any tightness.

Loving this series, Max! You rock, like a soft pliable plastic pebble!