Ok, I know, it doesn’t exactly work, and tendon grafts aren’t the stuff of childhood playground taunts, but the point is, if you or your student has had tissue harvested from the patella tendon to replace other tissue damaged beyond repair (severed ACL, anyone?), it’s critically important to rehabilitate the graft site.

After a portion of the patella tendon is removed, scar tissue builds up and deadens sensation below the knee. It feels like your cheek after the dentist has shot you up with Novocaine. Thick and fuzzy. So I can’t feel much in that little divet below my knee—so what? The ‘so what’ is that the patella tendon can rupture. It doesn’t happen often, but it’s is more likely when the tendon is already compromised (as in, half of it is being used somewhere else). If it ruptures, your knee buckles and you can’t stand.

The patella tendon is a continuation of the quadriceps tendon. So to get that thick and fuzzy fascia feeling good again, knead your knees with YTU Therapy Balls all the way around the kneecap from the quad tendon to the patella tendon. The gripping, grabbing, twisting and wringing of the balls will help break up scar tissue, restore sensation, circulation and health. Here’s a how-to video for this version of knee self massage:

Learn about our Therapy Ball Programs. 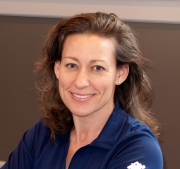 I believe most people who end up in the fitness profession are trying to heal themselves. Fifteen years ago I sought out SPIN to rehabilitate a full knee reconstruction. Ten years ago I started Pilates to help me recover from a horseback riding accident. More recently, as still-young age and old injuries caught up with me, I began a restorative and Kripalu yoga practice. In every instance, with every discipline, I've experienced a moment of “ahhh....I want to make everyone feel this good.” And so began my path toward fitness studio ownership where I could keep my classes small and focused on my client's journeys from injury, through healing, and on to strength. In addition to figuring out how my clients and I could feel even better (as well as look better in our jeans), curiosity about human biomechanics led me to study with Helena Collins of Life in Synergy, Sadie Nardini of Core Strength Vinyasa Yoga, and of course, Jill Miller. Combing the knowledge from these tremendous teachers with my strong Pilates background has enabled me to create exceptionally effective programs for my clients, who range from joint replacement patients needing post-physical therapy help to the “uninjured” wanting stronger, better aligned bodies so they can experience life to the fullest.

The Slimmest Part of Your Knee: It’s Not Just About Hemlines

Love the novocane reference! I’ve had three reconstructions on my patella and left with one of those infamous dead zones. I love the idea of skin rolling to promote circulation and break up adhesions and am going to add this into my regular YTU roll routine!

Christine, I’m curious if you have fully regained the sensation around your knee now? I am about 20 weeks post op from having my ACL & PCL repaired, and a MCL tear that they didn’t operate on. Needless to say, I have a lot of nerve damage; lack of sensation from my knee all the way down to my ankle. The doc told me to expect that the nerves will never be the same, however, he also didn’t think I would be able to practice yoga yet either, and well, I am. I would love to hear about your progress… Read more »

A great education about the patella tendon. I work with an injury on the lateral meniscus which I have had an operation for, and am awaiting another. So, my patella has fallen slighty to the back of my priority as I have been focusing a lot on the posterior muscles of the knee. Happy to learn something new relating to other focus of the knee- and also a reminder not to ignore any party of the joint!

I love this article and video. I teach YTU therapy ball work to an NBA team and talk about knee injuries and surgeries. This is definitely one to add to my tool box! Love it.

Hi Christine – Super helpful post, I am an avid tennis player who has patella tendonitis and I plan to start using my YTU balls on that exact spot to relieve build up and help calm the tissue down. Great suggestion.

Facinating! I had NO idea that Tendon grafts were often taken from the Patella! It makes total sense that rehab would be essentail after a proceedure like that, and I can certainly see why the Yoga Tune Up therapy balls would be amazing for this rehab.

These techniques are fantastic for individuals with jumpers knee as well, a lot of inflammation collects below the patella. Cleaning out the area between the patella and the tibial tuberosity is a great way to alleviate pressure.

This is great. I know a few people who have had knee surgery. I’ll definitely try this with them. Thanks.

Thank you thank you Christine, I have tons of scar tissue around my knee ad will be employing this technique. I have been numb for MANY years around the patella tendon and never thought about the dangers in not be able to fully tune in to that area. Looking forward to seeing if I can get some sensation back…

Thanks for introducing me to yet another great way to utilize the healing powers of Yoga Tune Up® Therapy Balls! And it’s especially timely as I have a friend back home who has undergone knee surgery after a bike accident and I’m sure this will be a great help to her! Super demo! And having just completed YTU Level 1 TT I must say I am Loving this YTU Blogg!! I learn so much every time I “tune in”!

This is an amazing and elegantly simple solution to scar tissue build up around the knee! I have not thought to use the YTU therapy balls in this fashion for my clients. I see a multitude of athletes and people with orthopedic injuries. I use the YTU therapy balls as I have found them to be some of the best tools for self myofascial release. Body weight pressure on the balls in strategic areas work incredible magic but I will try the skin rolling technique around the knee. It seems like this technique should also work for many other delicate… Read more »

This is very helpful! I have a ton of friends from my years as an athlete who have had one, two or even more knee surgeries. They continually complain about lingering pain or numbness and this is something I am eager to share with them. Thanks!!

Hey christine! I’m curious if some scar tissue build up/issues could develop around the patella tendon even if the ACL replacement wasn’t from the patella tendon… I’ll be doing this rolling regardless from now on to break up the scar tissue, but the tendon attachment area below my patella is showing some signs of tension and irritation.