After Jill Miller guides the viewer through a mighty sensation-full sequence for the hips in her Yoga Tune Up Lower Body Massage video, she turns toward the camera and says with a twinkle in her eye, “Gluteus medius, nice to meet ya-us!” Her comment delighted me because it both not only revealed Jill’s good humor but also validated my own secret propensity to personify our tissues. What if you could meet gluteus medius? Would she have hobbies? And, for heaven’s sake, why was my mine so grouchy?

Below is a fanciful musing of what the rotator cuff muscles might be like if they were office workers and you met them on a bad day. Can you tell which muscle has a painful tear?

The staff of GH Productions was in shock. All work had screeched to a halt. Everyone wondered why they were neither coming nor going. In response to a sharp memo sent from Head Quarters, they gathered in the break-room–their central meeting place–to await an announcement.

Infraspinatus and Teres Minor shuffled in from External Rotation, jabbing each other in the chest and whispering suspicious, inflammatory accusations. They were completely unnerved to see Supraspinatus, always so single-minded, in tears – weak and leaning onto a the edge of a table. (You would never know that Infraspinatus and Supraspinatus were sisters, so different were the directions they had taken in life. They hadn’t spoken to each other in years, but such is the way sometimes in families). Subscapularis, largely an introvert, sat glumly apart, pretending to clear a paper jam in the photocopy machine. Eventually, the group clustered around the coffee urn, crabby, complaining and as bitter as the coffee in their chipped cups.

When it was Deltoid who appeared in the doorway, everyone’s tensions lessened a degree. He had way about him. A natural leader, Deltoid exhibited all the capable confidence of someone who had worked his way to the top. Another individual might have inspired resentment from the staff – Deltoid was handsome, as well as multi-talented – but he was largely appreciated for his self-effacing manner and was known to be a guy who could (and would) support practically any task that the others undertook. (Poor Supraspinatus suffered silently, burying her long-held love for him deep in her heart. She had worked intimately with him for years, and she knew that if he asked her, she would follow him anywhere. She still harbored, however, a small flame of hope that he would one day return her feelings.)

Deltoid calmly informed the small group that their department was under new management. They were to going be required to streamline and improve their skills. Their factional squabbling would not be tolerated. They were to set their goals on a higher unifying purpose–that of supporting long-term stability for the Head of the Organization. They were to participate in team-building exercises to improve their relationships. There were going to be work-schedule rotations and new collaborations. They would soon see that they would all be the better for the changes, and that no one was going to be asked to shoulder more than his fair share of the workloads any longer.

Everyone took a deep breath. Infraspinatus and Teres Minor apologetically punched each other in the upper arms and smoothed each other’s collars; Subscapularis — making an effort to be more a part of the team — offered to drive everyone to an after-work yoga class; and Supraspinatus, lifting her face, saw Deltoid gazing upon her, smiling shyly from the doorway.

Come back on Friday for some movement ideas that would appeal to the rotator cuff muscles if they were indeed to bond in a yoga class together.

Enjoyed this article? Read Get Your Infraspinatus to Work Smarter, Not Harder 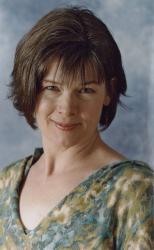 Leslie Wright (ERYT-500) strives to teach her students to develop awareness of the structures of their physical bodies through movement and touch; but she also uses--and encourages her students to learn—the exotic-sounding names of these structures: femur, fascia, fibula . . . She does so because she remembers her own initial fear of these terms; they sounded so alien, so not her. At times she felt as if being in her body was like attending a crowded party of complaining strangers. Leslie discovered, however, that taking the time to learn the names of these complainers was a good first step toward befriending them.

TOP TEN THINGS I have learned with Yoga Tune Up: Eleven is heaven

Maintain Shoulder Harmony from Your Desk

This made me laugh out loud and smile! Your wit and humor is refreshing and I’m going to search for your next installment.
Today was a heavy day in YTU training learning all about shoulders, and this took the weight right out of it:))
Thankyou!!!

Having a private client who is a serious golfer and tennis player, this will be very useful for our next sesion. Thx for sharing!

I’m intrigued by the natural leadership displayed by deltoid. I think I need to read the next vignette!

Oh thanks, gang, for the “thumbs up” regarding this snippet of anatomical silliness! Enjoy your training!

This was so much fun to read! I found myself smiling and chuckling aloud. What a great way to depict the relationships of this family of muscles with such creativity and intelligence! Thank you!

Dear Leslie, Your insight and imagination are incredible. I love Jill’s humor also, it brings such fun into this critically serious business of impeccably embodying our anatomy…you bring the same sense of educational joy! As a matter of fact, 3 of my delightful Yoga Tune Up classmates have commented on your blog, and I still find myself not being able to “not comment”. I am working with someone who struggles with glenohumeral subluxation and I think your brilliant “story” will help them to better understand the bio mechanics of what is occurring. Thank you for your blog, I look forward… Read more »

I absolutely adored this! What a fun way to look at things. Thanks for keeping it creative!

Fantastic metaphor. Makes it easier to remember the tasks of the rotator cuff muscles. There’s a slew of great unqiue adjectives and verbs we can inject into our Yoga Tune Up® classes! Thanks, Leslie!

Wow Leslie, this is beyond creative! I can’t tell you how many times I chuckled out loud while reading this. I love your concept on personifying your tissues while getting to know them. I hope you continue to blog and create “tissue stories” because this is genius!