For those that know me well, I am not typically one who spends much time talking about, let alone writing about myself. However, I felt more than a little inspired to do just that, when Jill Miller recently reached out to her community seeking testimonials from female athletes and how they have incorporated Yoga Tune Up® and/or The Roll Model® Therapy Balls to enhance their performance. I quickly sat down and put proverbial pen to paper and as a result, have created this personal testimonial which I am humbled to share with you.

I am a female amateur athlete in Canada, currently competing in the male dominated sport of kart racing. Many are often surprised to hear that “karting” is an intense and physically demanding sport. Unlike a car, the racing karts I drive do not have either the luxury of power steering, or a suspension. One must maneuver an open wheel kart around a race track at speeds of and in excess of 80 kmph, all whilst sitting an inch off the ground in a hard fiberglass/carbon fiber seat, navigating through corners of varying degrees of complexity in multiple directions. As a result, all of the stress of movement and associated bumps are absorbed from the tires and chassis and then transmitted directly through the body, as well as all of the G-forces (<2.5G) experienced through intense cornering, and harder braking than would ever be experienced in normal road or driving conditions.

First, here is a little background history. I started racing competitively in 2012. During my first three years of racing, I sustained various injuries from the aforementioned physical demands of the sport, including fractured ribs, which are a fairly common injury in kart racing. At this time, I had already been a certified Yoga instructor for many years, but it was in early 2015 that I discovered Yoga Tune Up® and the Roll Model® Therapy Balls and have not looked back since. The high grip rubber therapy balls highlighted muscular tension and scar tissue that had accumulated in my body over the years of racing.

When I first started by diligently practicing the various self-care techniques, I observed that my tissues felt hard and unyielding. However, over time the therapy balls began to literally work their magic and I could feel my body responding and unleashing this accumulated tension. It was when I targeted the latissimus dorsi and external rotators of the shoulder that I really found the biggest change and overall benefit to my body and application to my racing. Utilizing the ALPHA ball at a wall to access these muscles I discovered the techniques of crossfiber, pin & stretch, and contract/relax (PNF) provided the most release.

Furthermore, through the use of the therapy balls, I developed an increased awareness of the large muscles spanning my back. By working on strengthening exercises focused in this region, I could now feel a more cohesive engagement and contraction of my posterior torso muscles, specifically the latissimus dorsi. Overall, these changes translated into better posture and a more efficient driving position to handle the rigors of racing. I was now able to sit up straighter and subsequently utilize the large and powerful muscles of my back and core to stabilize myself in the seat, instead of largely relying on the smaller muscles of my arms as I had always done previously.

In addition to performing self-care at home, I now always travel with a pair of therapy balls. Capitalizing on this travel time (as a passenger), I roll out my tissues during the journey to the kart track as a warm up and also on the return trip home to cool down and ease any soreness.

I am a firm believer that the regular use of the therapy balls has enabled me to remain injury free throughout the entire 2015 season. As a result, I was then able to focus on my race craft injury free and beating out my fellow male competitors. The 2015 racing season culminated in achieving two karting championship titles. The Simcoe Kart Club Masters Class Championship and also the Canadian Rookie Karting Championship. In this latter series, I finished first overall in the standings out of 342 fellow adult competitors and also became the first female overall champion in the history of the series.

On a lighter, more humorous note, I will remain forever humbled after a race when I remove my helmet and my competitors see that they have been beaten by a female, and one of a “mature age” at that! Their reactions vary greatly, some are inspired and wish they could get their wives/girlfriends to race. This tends to be the minority. There are always more than a few who are simply not very amused. I take it fully in stride with a discrete smile to myself, shake their hand and think ahead to the next challenge.

Enjoyed this article? Read Free Yourself From Bad Posture 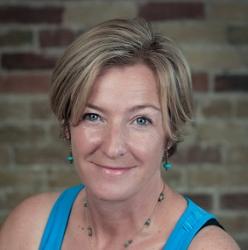 Sue Taylor is a certified yoga teacher through the Esther Myers studio in Toronto. She is a regular teacher at CNIB (formally known as the Canadian National Institute for the Blind) where she created a yoga program for their clients. This unique experience keeps Sue on her toes and challenges her to dig deep into her tool box of knowledge and creativity. Always keen to develop her understanding of yoga and movement based modalities continuing studies has led her to the work of Jill Miller. Attending her first Yoga Tune Up(R) class Sue remembers that it 'felt so right'. Her body felt amazing and she knew this was something she wanted to explore further. In addition to her teaching at CNIB, Sue offers private classes, corporate programs and workshops in the Newmarket and surrounding areas.

Yoga Tune Up® for Mammahood! Part 3

Another reminder that YTU is for everyone! Thanks for this!

I had no idea kart racing was so intense. I can see through your description why you dealt with such hard tissues. How cool that you were able to loosen that up and find better posture that allows you to be more efficient at your sport. I never would have guessed that a kart driver would struggle with their latissimus dorsi. I’m interested in various athletes’ experiences – thanks for shedding light on yours!

Thanks for sharing your story. My sister and my three nieces live a good 7-8hr drive so lately I’ve been rolling and moving before I begin my drive. It’s not quite the same as the g-forces encountered during racing but it definitely helps with my posture and fatigue during the long stretch in driving position. The last few trips I’ve taken to rolling on the walls of the rest stops to give that little bit of relief between breaks. Most people stare at the strange guy rolling around on the wall but I get a nod of approval from time… Read more »

Thank-you for sharing your story Sue! The YTU balls are transferable to any sport/modality as you’ve just shared. I love that you take them with you as well. Homecare routines can be done anywhere! Thank-you for capturing your experience from your unique sport and congratulations on your Championship win! You are an inspiration. =:0)

I have been part of the team on a race track for the last 5 years and seen first hand the glorious and exciting aspects of this sport as well as the detrimental ones! Working with many drivers I have seen the accumulating effects of injuries that often times led to compensatory postures and habits over the years! Having more option in the toolbox to release tension and prepare for upcoming races is a game changer for many!

I love how rolling has given you better proprioception of your body. YTU is such a game changer!

Much respect for competing in this sport and sharing your inspiring story on how YTU has benefited your life!

CooL woman! I can certainly agree that the therapy ball are almost magical to help in this kind of activity! I personally use the balls every time I sit in a regular car!

Sue, your story is amazing!
I love that you are doing what you love, no matter what gender the sport was initially “intended” for.
It was interesting to hear that the therapy balls also help with scar tissue. Many people I know have this issue and I am excited to help them through it with YTU.

My fiance races motorcycles in a club-based program. He has been coming to me on ways he can strengthen his core and leg muscles so he can more effectively position his body on the bike (he drags his knees on the ground while racing, it’s quite scary and cool to watch). After a race weekend he is typically very sore. I am going to recommend that he use my tune up balls to help strengthen and massage his racing muscles.

thank you Sue!! loved your story. you are so cool 🙂

Thank you Sue for sharing your story. Very inspiring! It is great to see the how the YTU balls are effective and therewith reconfirming that it was the right decision to do the YTU Level 1 TT. I discovered YTU during a time when I was training a lot and it was just great to have this kind of self care.

Wow congratulations Sue, on your achievement, WELL DONE YOU 🙂 and in remaining Injury free with your diligent self care practice using the Yoga Tune Up® Therapy balls , quite an inspiration.

Sue,
Thank you for opening my eyes to another potential audience for the gift of Yoga Tune Up & the magic of the therapy balls. I found your story inspiring and you have provided a little motivation to “just keep rolling” as our tissues will respond to the work.
Thank you!
Beth

This article is very helpful, motorsports athletes face a variety of challenges, and the ability to prevent rib injuries through rolling the latissimus dorsi and external rotators of the shoulders is very inspirational and gives a valuable lesson. This method could also work for other sports where the athlete may sustain rib injuries from external forces on their bodies.

Great article Sue. I have noticed that part of my lats are a bit of a blind spot for me, and am overworking my upper body to compensate. Your post is very timely for me. Thank you.

I enjoyed your blog , thank you for sharing ! When you demand so much of your body the ability to care for yourself with the tune up balls is a lifesaver . You can build your body up instead of tearing and wearing it down .

Hi Sue. Thanks for sharing your story. It made me think of a friend who loves to drive his motorcycle. This encourages me that I can help him alleviate pain sustained while he served in Iraq.

Thanks for sharing your story, Sue. It made me think of a friend who loves to ride his motorcycle. He has injuries sustained while he served in Iraq, and now I am encouraged that I can help him.