Trapezius: Friend or Foe to Itself?

The trapezius is a large diamond shaped muscle on your back that runs from the base of your skull, out to your shoulder, and down your thoracic spine.  This muscle is easy to palpate as it is the most superficial of your posterior muscles. We use our trapezius for movements such as shrugging, rowing, and reaching up overhead.

Because the trapezius has a broad range of actions, some of which oppose each other, this muscle is anatomically broken down into three parts: upper, middle, and lower.

The overworked trapezius can be its own best friend or worst enemy.

The upper muscle fibers of the trapezius originate from posterior aspects of the skull and neck:  superior nuchal line (medial third), occipital protuberance (external), and the ligamentum nuchae (posterior neck ligaments).  They insert onto the clavicle (lateral third). The upper trapezius extends, laterally flexes, and rotates the head and neck, along with elevating and upwardly rotating the scapula.  A muscle with similar action is the levator scapula.

The middle muscle fibers of the trapezius orginate from the spinous processes of C-7 through T-3.  They insert onto the acromion process and the spine of the scapula (superior). The middle trapezius adducts the scapula (shoulder retraction), stabilizes the scapula, and performs a small amount of upward rotation and elevation of the scapula. Muscles with a similar action are the rhomboids.

The origin sites for the lower muscle fibers of the trapezius are the T4 – T12 spinous processes.  These fibers then insert themselves onto the middle and inferior portion of scapular spine.  The lower trapezius depresses and upwardly rotates the scapula. It does adduct the scapula some as well. With the origin site on the thoracic spine, the lower trapezius can also act as a weak spinal extensor when the insertion site is fixed. A muscle with similar action is the serratus anterior.

I remember when I became intrigued by the trapezius muscle.  It was during my upper level anatomy course in college – Human Dissection.  The cadaver I was assigned to was a petite elderly lady.  During one of the first days of lab, my professor asked us to begin dissecting away the skin and adipose layers of the mid to upper region of the back to expose the trapezius muscle.  My lab partner and I went carefully to work at the lower regions of the thoracic spine.  While we were dissecting away the yellow adipose tissue we began to comment that the adipose tissue was looking a little bit odd, linear in appearance.  We continued to remove this tissue away expecting to find the lower trapezius muscle underneath.  It was a bit surprising to find rhomboid major and latissimus dorsi instead. What my partner and I soon learned was that the linear shaped adipose tissue we removed was actually the lower fibers of the trapezius muscle which had been transformed through a process called fatty infiltration. This elderly lady apparently had some type of degenerative disorder, such as severe kyphosis, that prevented her from being able to use her lower trapezius muscle to pull her shoulders down and back or upwardly rotate her scapula for overhead reaches. Because of her inability to contract these lower fibers, they were eventually converted into fat.  The upper muscle fibers of her trapezius were normal.

In my next post I’ll give you a Yoga Tune Up® pose to help keep your whole trapezius healthy and happy!

Read “Get Your Trapezius In Tune!” 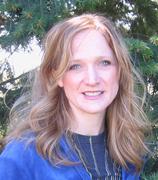 After incurring a knee injury (ACL) during a basketball game as a teenager, Marla Brackman’s interest in human movement, injury prevention, health, and performance was birthed. She then sought out and completed her B.S. in Exercise Science from Montana State University – Bozeman. Shortly after, she acquired her Group Fitness and Personal Training Certification through American Council on Exercise. Most recently, Marla became a Certified Yoga Tune Up® Teacher. You may find her leading group kickboxing (TurboKick®), pilates/yoga (PiYo®), stability ball, water aerobics, sports conditioning, bootcamp, TRX suspension training, as well as other formats. “This one tool, Yoga Tune Up®, is transforming all of the other tools in my box. I love that it not only helps others move better, but to FEEL better.”

Get Your Trapezius In Tune!

The coolest part of this story, to me, was your personal experience removing the layers of the cadaver to only discover the body converted the lower portion into fat. Our body’s are magical at being efficient to the environment in which tissues live and focusing efforts on the muscles that are actually being used. This is a good warning to us as we age as well!

This was a fascinating blog post. I love how the trapezius seems like a loving family – sometimes helping each other, sometimes fighting each other, and stuck together in the same tiny house! I appreciated how you broke the information down into usable chunks. And, of course, your dissection story will stay with me as a reminder that we will not all look like the pictures in our anatomy textbooks, but that we may indeed become altered by what we do or do not or cannot do.

Hi Marla,
Appreciate the detailed blog post about the trapezius. This muscle intrigued me during the YTU anatomy immersion and your article has helped my understanding of its actions with the multiple fiber directions. Adding in the muscle names with similar action further helped light up a few more lightbulbs in my head! Your personal reflection when dissecting the upper back on that cadaver was probably a light bulb moment for you too!

Amazing! It has been a billion years since my experience with dissection (which I struggled with on many levels ) Your discovery is so interesting and a good reminder to remember there are many very unusual occurrences that we are unaware of. When we assess ourselves and clients posture, strength, ROM, for example, we need to keep very open mind. Thank you Marla!

That’s so interesting, This is my first time hearing that something like what you saw in that body is possible. I’ve always avoided the trap since it seems to wing up over my shoulders like it’s going to take over. Now I have to see your next blog!

Wow, your dissection sounds a bit scary! So many people that I know, that I see and especially as people age walk around contorting their bodies to compensate for kyphosis of the spine and it never occurred to me how serious this could be! I wonder after how long is it irreversible, after how long do you literally lose the muscle once degeneration begins. Besides the trapezius contributing to fabulous and effortless posture it feels sooooooo good to roll it out. I’m going to walk around with some YTU balls and give them to everyone I see.

Great description on the anatomy of the trapezius. The upper trap and lower trap are so important for proper shoulder mechanics to prevent impingement syndromes through their action of scapular upward rotation.

The more I have been rolling on the balls, the more I feel I am able to activate the lower trapezius muscles. I think it’s amazing as I always just felt traps were up high, then just rhomboids below, it is fascinating to feel the difference in movement once you awaken new tissue.

Great information. Interesting that the tissue converted to fat from the inability to contract. I know my trapezius is extremely tight and using the YTU balls really help break up the fasciae. I have more mobility in my neck and shoulders when I am consistent is the use of the therapy balls.

I love this article. People need to know their bodies and what they can do to keep them functional. #movementismedicine The Trapezius does so many actions.

Great break down of the Trapezius! I knew if muscles went unused they shrank, and i sorta assumed they’d just harden, it never occurred to me that they’d break down into fat. Our bodies are so complex.

Thank you for the anecdote about the elderly woman, I’m going to do some research into Fatty Infiltration. Very interesting!

WOW, Marla you just reinforced my desire to do a dissection and study more thoroughly the anatomy, Love your personal story! just prove again how the body adapt and transform itself to respond to it,s need!

Super interesting! I wonder if the degenerative disorder was a “use it or lose it” kind of thing. Great reminder to stay active and mindful of our bodies as we age! Thanks!

Wow great post! That’s really interesting that the tissues can change so much.

Great education! Didn’t realize the upper trap started at the base of the skull….also, your story of the elderly lady(bless her!) makes me even more aware to continue to improve my own health. Thanks for sharing!

Great article. You were up close and personal….which makes it even more interesting.

Great information, and informative for me as a fairly new YTU® instructor. This explains some issues I have come across in my teaching already. I look forward to your next post!! Thank you!!