Groningen, Netherlands
YTU Training Type:
Yoga Tune Up® Certification Training
The Roll Model® Method Training
The Roll Model® Method Training
Email:
[email protected]
Website:
https://www.facebook.com/AthenaVassilatos.Yoga
Yoga became an important part of Athena’s life as it became a refuge from the stress of studying in business and accountancy. It has then evolved into an introduction to being conscious of her health and well-being, now being a source for strength, agility, and peace of mind. She has soon become increasingly interested in the practice, eventually deciding she wanted to share with others what this practice is to her.

After studying her first 200 hours teacher training in 2015 with Yoga Arts in Bali, Indonesia, Athena became more interested in both anatomy and meditation, leading her to become a certified Yoga Tune Up® teacher in 2016.

Athena’s classes are based on thoughtful sequencing for strength, agility and mindfulness. Her main goal as a yoga teacher is to guide students through fun and safe movement while cultivating presence. 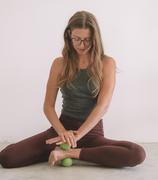