Integrated Teacher
Moreland Hills, OH, United States
YTU Training Type:
Yoga Tune Up® Certification Training
Shoulders Immersion
Core Integration Immersion
Hips Immersion
Breath and Bliss Immersion
Email:
[email protected]
Website:
http://www.evoyoga.com/
Ed has been active in athletic and movement-oriented practices since childhood. He competed in swimming and fencing as well as Modern Pentathlon (which adds  horseback riding, running and pistol shooting) through highschool. Of the many martial arts Ed has practiced, Aikido's blending of spiritual and physical practice, combined with empathic and compassionate training methods, resonated most with him and he holds a Nidan from Aikido Schools of Ueshiba.

As a software engineer for the past quarter century, Ed has not only had to deal with the frustration of interacting with computers on a daily basis, he's also had to cope with the negative physical impacts of sitting for long periods of time.

Seeking to heal some injuries, counterbalance the effects of sitting so much and to feel better physically, Ed began his practice of yoga in the early 2000's. At first, yoga simultaneously helped and hindered the healing; helping by increasing flexibility, strength and body awareness; hinderering by overly increasing the flexibility in some places - leading to joint instability, and failure to strengthen other key areas.

Yoga Tune Up® has been so beneficial to his physical well-being that he was inspired to become a Yoga Tune Up® teacher. 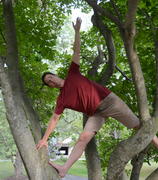