Portsmouth, Hampshire, United Kingdom
YTU Training Type:
Yoga Tune Up® Certification Training
Core Integration Immersion
Integrated Embodied Anatomy Training
Breath and Bliss Immersion
Email:
[email protected]
Kat has been involved in dance and sport from an early age, completing her BA (Hons) in Dance Theatre at the Laban Centre, London in 2000. Introduced to yoga in a gym to supplement her dance training, her formal study began much later with Jana Appleyard in London in 2006. Kat was fortunate to be an apprentice of Jana's, studying and practicing the Shadow Yoga method for five years.
Kat completed her 200 Hour Yoga Teacher Training in Bali in 2015 with Zuna Yoga which has its roots in Tantra. Her classes follow this system with an emphasis on the breath work, asana, bandha, pranayama and meditation. Carefully and specifically crafting each sequence for a meaningful journey and outcome. Offering group classes, workshops, private sessions and working within schools in the south of the UK, Kat strives to give people the yogic tools to live a happy, healthy, joyful life, to thrive and be a more powerful individual in the world. 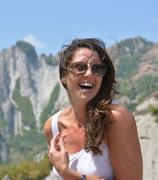