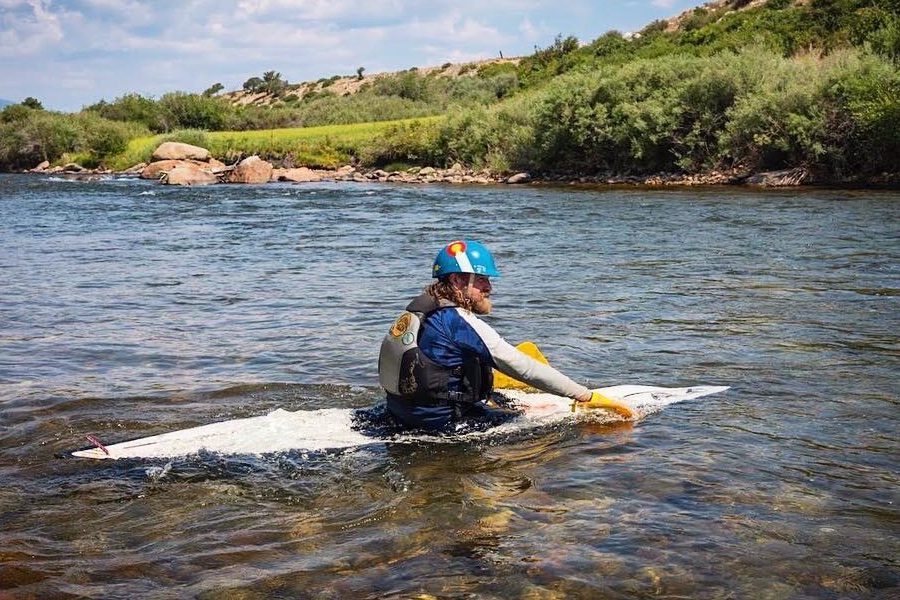 The Confluence of Pain and Pleasure: Navigating the Currents of Adventure with Squirtboat Champion Jeff Lane

Growing up in the Smoky Mountains of Tennessee, I’ve always been obsessed with whitewater rapids. By the age of 21 I was a professional whitewater raft guide on the Ocoee River, TN (site of the 1996 Olympic whitewater events). This is where I discovered my true love for whitewater kayaking.

Fast-forward 22 years and I’m still kayaking. In 2017 my friends and I completed a self-support kayak speed run of the Grand Canyon (226 miles) in 7.5 days. I have another launch date set for this November–this time a more relaxing 21 days with beach balls (and coolers of beer!).

There’s nothing like it. These are the most ancient water currents on the planet. When one submerses them self in these waters their soul becomes charged with some sort of kinetic energy from beyond the cosmos that stays with them for the rest of their life.

From Classic Kayaking to a New Sport: “Squirtboating”

The type of kayak I am bringing is called a ‘squirtboat’. A squirtboat is an obscure, specialized type of low volume whitewater kayak designed to sit just below the surface of the water. It was invented by a guy named Jim Snyder and developed on the New River, WV and Ocoee River.

The squirtboat is intended to be paddled into the confluence zone of 2-3 merging currents. The merging currents form a downward draft like a whirlpool under the surface and this allows the squirtboat to be sucked under or “squirted” by the river currents. Once the boat is under water it spins like a helicopter blade downstream.

There is a second river underneath the river you see on the surface and most often this deeper river is much more peaceful. All you feel is different currents around you just like you were flying through the air sitting on top of a whirlybird.

Instead of a long paddle, most people use hand paddles for better stabilization and to act as rudders underwater. Or you can actually spread your arms and it feels like you are flying.

This can create some serious knots in your back though and that’s where the the Roll Model® Method massage therapy balls for deep tissue massage come in handy, which I will elaborate on in a minute.

Once you get squirted under, you’d better be able to hold your breath, calm your heart rate, and enjoy the ride.

If you freak out and struggle you are going to burn all of your oxygen before the boat resurfaces. The boat WILL resurface… eventually, the laws of physics command it.

The Challenges of Competitive Squirtboating

In squirtboating competition, the objective is to travel as far as you can and stay under for as long as you can. I believe the world record is (currently) somewhere around 65 seconds (unreal). 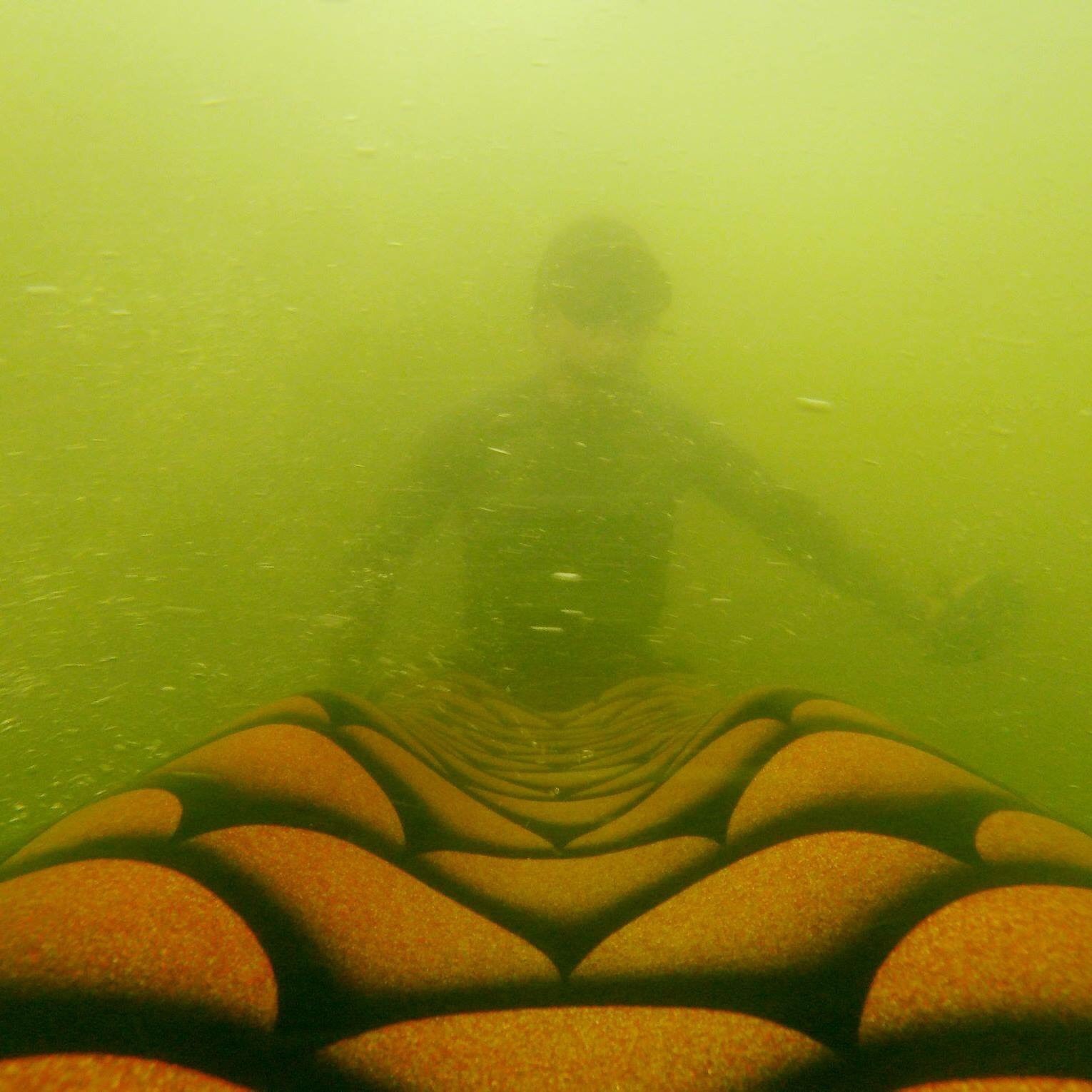 A squirtboater submerged under water

My longest rides have been 15-20 seconds traveling around 20 yards downstream at a bottom depth of around 12’.

I recently won the Rocky Mountain squirtboat competition, not bad for an old guy with a hip replacement. 😉

The Aches and Pains of Living an Adventurous Life

Living an adventurous lifestyle has definitely started to take its toll on my body. Four years of college rugby, 10 years of raft guiding, and 22 years of rolling kayaks left me with a total hip replacement and a diagnosis of early onset osteoarthritis at age 40.

The year leading up to my hip replacement was the worst. I thought I had ripped a tendon or something in my groin and kept telling myself “it’ll get better.”

I ended up on a cane and the arthritic inflammation was in every joint before I finally admitted to myself “something is really wrong here, you’re not supposed to feel this way at age 40.”

Once I had the surgery I felt so much better! Within six months my kayak roll was impeccable with this nice new lubricated joint.

The inflammation in my other joints never went away so I was still in a lot of pain–I was just suppressing it in my mind. That’s when I discovered a CBD tincture (only sold in Colorado at this time). It attacked the arthritic inflammation and gave me my life back. So I became a rep for the company and I’m happy to promote something I believe in so much.

Self Deep Tissue Massage to Manage Hip and Back Pain

In a similar way I discovered the massage therapy balls through a good friend I had just met at a friend’s wedding.

The day before the wedding the entire party rafted 12 miles of Brown’s Canyon on the Arkansas River, CO. I followed the trip in my squirtboat using hand paddles.

After the trip my back was extremely knotted up and my friend suggested that I lie on the floor and roll the balls underneath my back and wow! I could feel the balls crunching up all those knots and for the rest of the weekend I felt great!

Come to find out, she (Stephanie Fraide) worked for the company. After observing my enthusiasm for the product, she had a sample pack sent to my home to try out and give feedback. And that, my friends, is why I am writing you today.

If you lead an active lifestyle (or even if you don’t), these balls work!

1) Upper Back Self-Massage: Take two small therapy balls and place them between your shoulder blades (laying on the floor). Bend your knees and gently roll them up and down in a small area. Then reposition them one area lower and do the same until you work your way to the small of your back (five minutes). 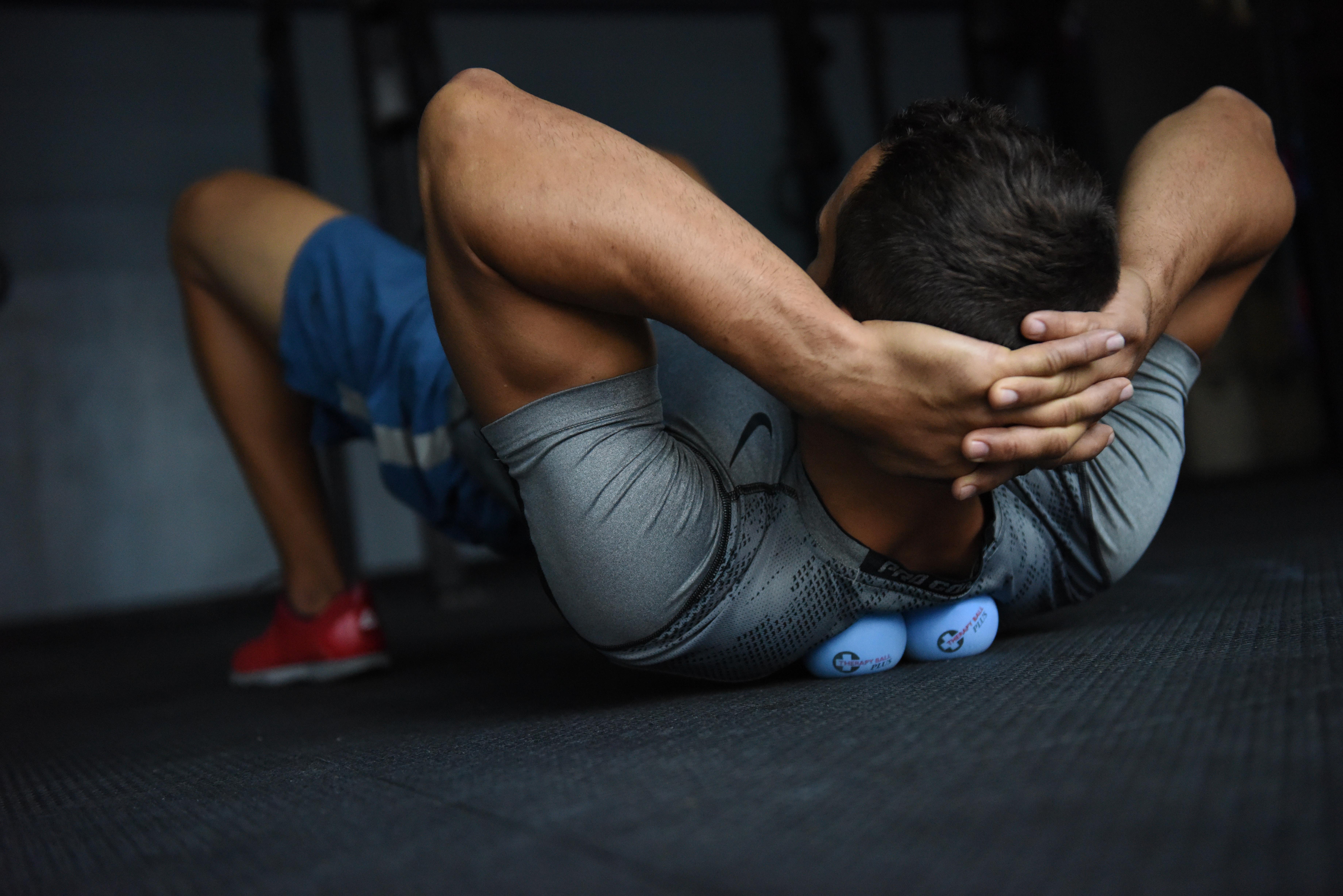 2) Self-Massage for Sciatic Pain: Take the larger Alpha ball and place it between a wall and directly on your sciatic nerve (which is deep under the glutes). Roll the ball around that area on both sides (looks like a bear scratching his rump on a tree). (Five minutes.) 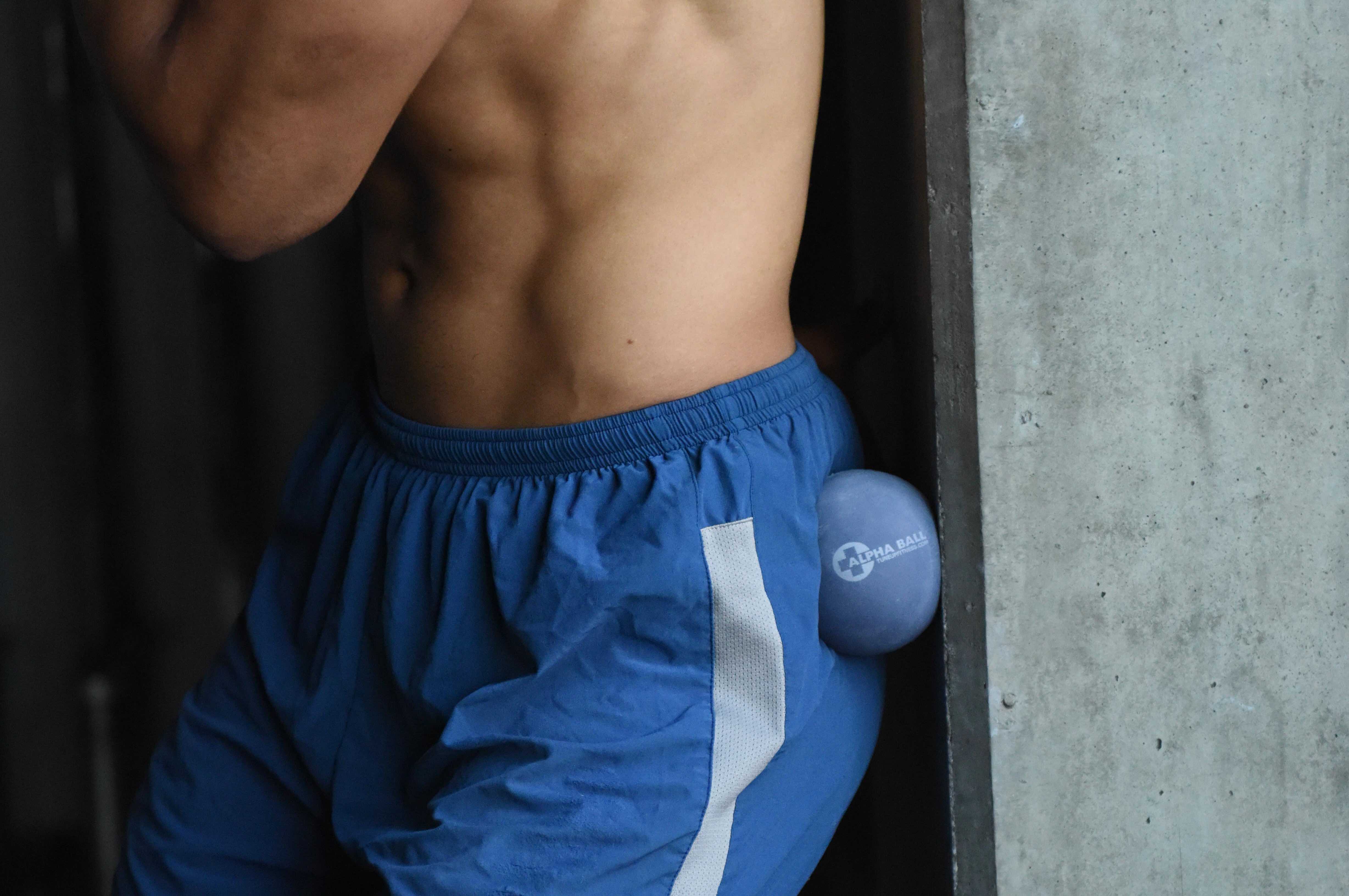 3) Self-Massage to Decompress Intervertebral Discs: Take the inflatable Coregeous ball and inflate to 2/3 full. Lay on the floor and put it under your pelvis and gently roll it from side to side for five minutes. For me it feels like it allows spinal fluid in that area to flow better and takes pressure off my discs allowing them to breathe a little. 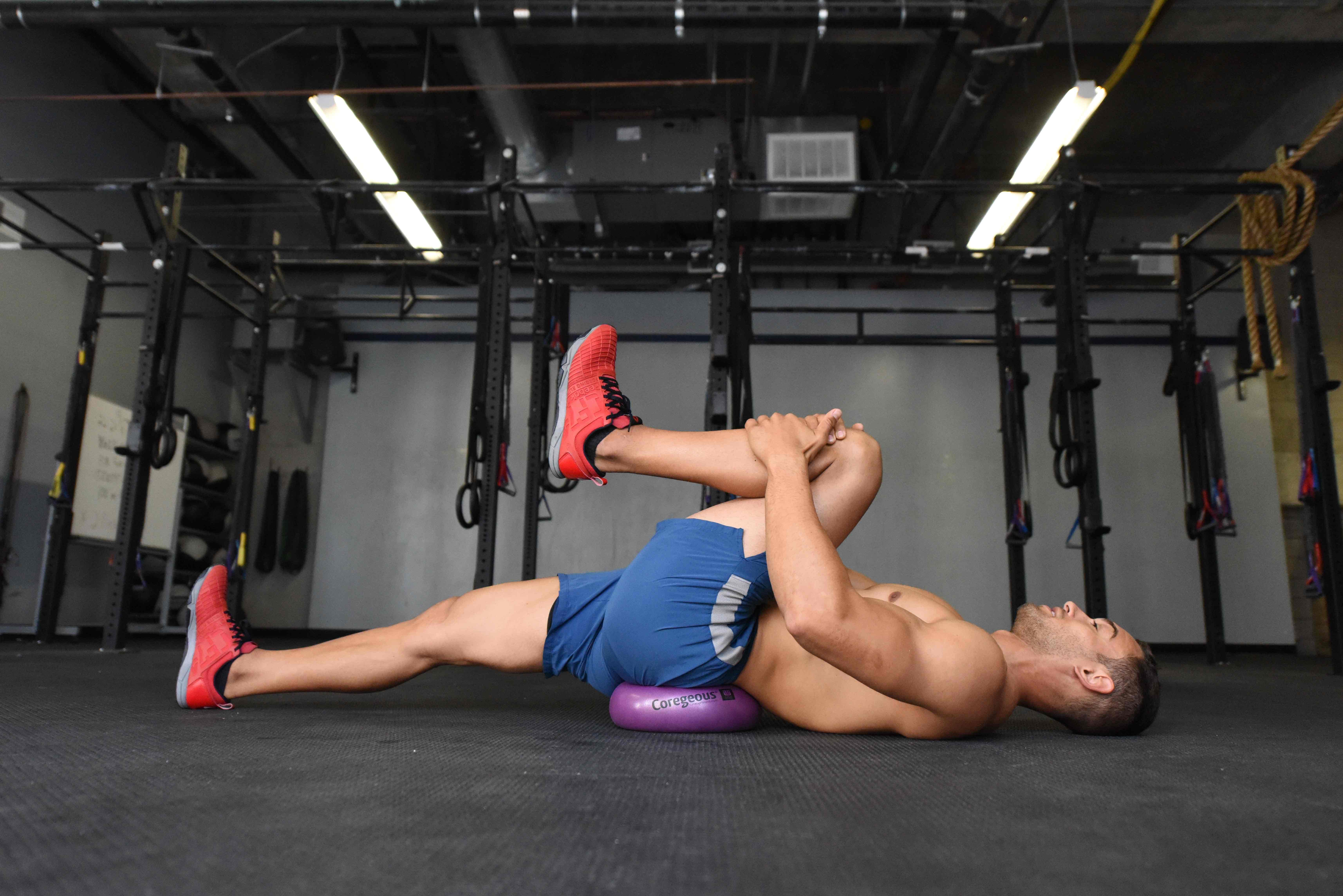 Massaging the sacrum with the Coregeous ball

After 15 minutes I’m all loosened up with minimal stiffness and off to attack the day, or my bed (depending on when I roll).

This helps me keep an active edge on life and decreases the amount of “old man noises” I tend to make when I bend over to pick something up.

I’m 43 now, I know I’m not going to be able to roll kayaks and squirtboat for forever, but I see myself doing it well into my late 50’s at least. Then I’ll just stick with rafts and long leisurely float trips with overnight camp spots until my late 90’s. Then I’ll move to Arizona and pick up golf.

In the meantime, I can’t wait to take these therapy balls down the Grand Canyon this November and see how they work on my friends’  backs after oar rowing a raft all day!

Liked this article? Read Surf Breaks and Back Aches: Fitness Therapy for Surfers

Training Beyond Your Limits: Stretch and Self-Massage for Ultramarathon Running

I like how there is an exercise for each ball type and so very cool to learn about Squirtboating (although my heart raced watching it suspended underwater, wondering how it would surface). It would seem when passion is in play, that pain takes a backseat, I remember this well from my time as a rugby player too.

The emotional connection with the subjective experience of pain has become a mini fascination for me. It is interesting how we may not notice aches and pains during a pleasurable and wholly immersive activity.

It was beautiful, it prouves that even with some chronic pain, we must not stop moving but move and roll (relax muscles) intelligently! That’s it!

So interesting! Great to hear you found a way to manage your pain and keep doing what you love.

Margaret- desensitization and denial are the enemy! 😉

Beautiful description of your connection to that body of water. I felt that. As for suppressing one’s awareness of the pain one is in…I hear you on that front. I’ve spent years dealing (and not dealing) with pain and a lot of that pain just became part of what I considered to be “my normal”. It wasn’t until I found the YTU Therapy Balls that my awareness and perspective shifted (on a grand scale). Thanks for sharing your journey.

The meditative state of being underwater and “letting go” within the under water currents sounds mystical. What an interesting environment for deep introspection and a challenge of proprioception of the body. It is incredible to see the therapy balls in application to such a wide and full-living community of active people. It is a pleasure to watch this community grow.

What an awesome pleasure to read! The writing and the content are great! The author seems to genuinely want to spread the joy! ?❤️✌️?
By the way, is he single??