It’s true that Serratus Posterior Inferior is not the musclebrity that Serratus Anterior is.  If you read up on yoga anatomy, or take yoga from a teacher who does, you’re most likely enamored with your Serratus Anterior (a crucial scapular stabilizer in almost every inversion and arm balance).  That being said, I wouldn’t necessarily recommend writing Serratus Posterior Inferior off the A-list of muscles you should know about.  Especially if you’re interested in practicing a breath control technique called the Yogic Complete Breath.

The Serratus Posterior Inferior is highlighted in red here.

As practiced in the YTU method, a Yogic Complete inhalation takes place in two phases to maximize lung capacity.  Phase one of this yoga breathing technique secures the rib cage (Enter Serratus Posterior Inferior.  But more on that later!) so just the lower belly swells until the lungs are about 75% full. In phase two, the yogi permits the rib cage to lift upward filling the lungs the remaining 25% of the way. Try it!  Bring your spine into a neutral position.  Fully exhale.  On inhalation, only let your belly puff out.  ¾ of the way through let your ribs puff up as well.  Exhale passively.  Repeat several times and observe how this pranayama boosts lung capacity.

How does this work?  In phase one of the Yogic Complete inhalation, the diaphragm (a domed muscle that horizontally divides your trunk into its thoracic and abdominal cavities) flattens downward toward its inferior attachments on the lowest 6 ribs and lumbar vertebrae, packing your abdominal organs deeper down and clearing space for your lungs to swell. Your belly bulge is evidence of organ displacement as you take an abdominal inhalation. Phase two completes the process with a thoracic inhalation, during which the ribs puff upward and outward further augmenting space for the lungs to engorge.  [This rib expansion is also assisted by the diaphragm’s attachments to the ribs.] It’s phase one that we’re concerned about with regards to the importance of Serratus Posterior Inferior and its role in bracing the rib cage to leverage a deeper descent of the diaphragm.

Like all muscles, the attachment sites of Serratus Posterior Inferior determine its function. Its serrated strips connect from the spinous processes (the jagged topography of your spine felt through the skin of your back) of vertebrae T11-L2, and reach upward and outward to ribs #9-#12.  Seen from a posterior view of the skeleton, both the right and left Serratus Posterior Inferior muscles form a shallow V that overlay the lowest floating ribs.  SPI’s function is to anchor ribs #9-#12 downward toward its attachment on the spinous processes below so that the ribs don’t elevate during the first phase of the Yogic Complete Inhalation.  But why would we want to secure the ribcage during phase one?

Imagine you have wedged yourself between a heavy dresser and a wall with the hopes of shoving the dresser out into the middle of the room with your legs. With your back against the wall, you harness the complete force of your legs, including the rebounding force, which, because of the wall behind you gets redirected back into the dresser. To put it another way, imagine how much harder it would be to move the dresser if while pushing with your legs, both the dresser and the wall moved. The dresser would only move ½ the distance!  In this metaphor, the diaphragm is the pusher wedged between the rib cage and the abdominal organs.  Its job is to move the abdominal organs down and out of the way to make space for the lungs above to inflate.  Just like the role of the wall, in stage one of a Yogic Complete inhale, we want the ribcage to remain stable so that the diaphragm’s descent downward isn’t diminished by the ribcages ascent upward. Serratus Posterior Inferior (along with help from its synergist friends) cancels out the ribcages inclination to elevate.  This maximizes the influx of breath during stage-one of the Yogic Compete inhale, making stage two, or the thoracic inhalation, icing on the oxygenation cake.

Learn about our stress relief products.

Read how to breath away stress. 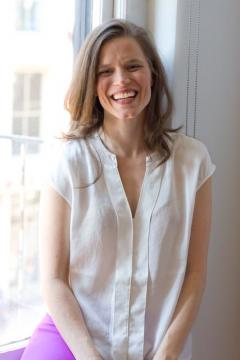 Make Your Posture Perfect: Breathe Down Your Spine

A vivid and educational blog! I am no stranger to Yogic Complete Breath as I have been teaching it for years, because I FEEL how it allows for that extra lung expansion that is a complete breath. The SPI function will definitely be added to my instruction as it really accentuates the 360 degree breath by bringing awareness to a specific area of the posterior body. Visualizing a muscle on the back of the torso low back will increase proprioception of that area and the role it plays in the descending diaphragm and lung capacity. As well as the body’s… Read more »

Wow, I didn’t knew this muscle played a huge role during our rib stabilization in Yogic Breathing. Usually for stabilization I tend to think about core muscles but never about a back muscle in our lower ribs. Interesting to picture it during this pranayama! Thank you for creating awareness of this under-estimated muscle!

Like most Yogi’s the SA has been my main focus. Especially when practicing and teaching arm balances. Never realizing it has a cousin the SPI that aides in breathing. I’ll be paying closer attention next time I think I’m rolling my QL’s. Thanks for the intro! 🙂

Wow!! I don´t remember that I had study or even hear about this muscle in any yoga course before… I am amazed by the importance of this muscle for deep breathing. When we think about breath we think about chest and abdomen but we usually forget about our back. I will pay more attention to it. Thank you

This caused me to get out the Trail Guide and see for myself. I had no idea about the SPI and its roll in the exhalation, diaphragm and ribs. So cool to be excited about a new muscle!

Really enjoyed reading this. The relationship to breath is very under rated. I am going to roll this along with my QL next time.

So cool to learn something new like this! I have never heard of the Serratus Posterior Inferior before but I won’t forget it now. It is definitely worthy of recognition and respect and Im going to enjoy sharing this bit of knowledge 🙂 and as always amazing descriptions!