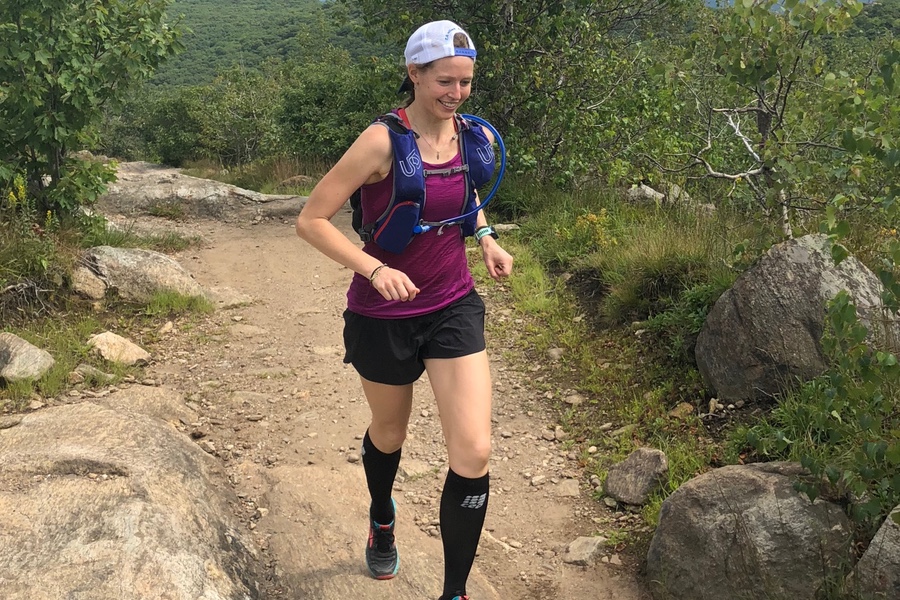 Training Beyond Your Limits: Stretch and Self-Massage for Ultramarathon Running

Someone told me that running a 100 mile race is like living a lifetime in a day. I haven’t lived a full lifetime, so I can’t really compare. But I can say that I walk away from each race with a new perspective on life and what I am capable of, and I always want to do it again.

The Trail to an Ultramarathon 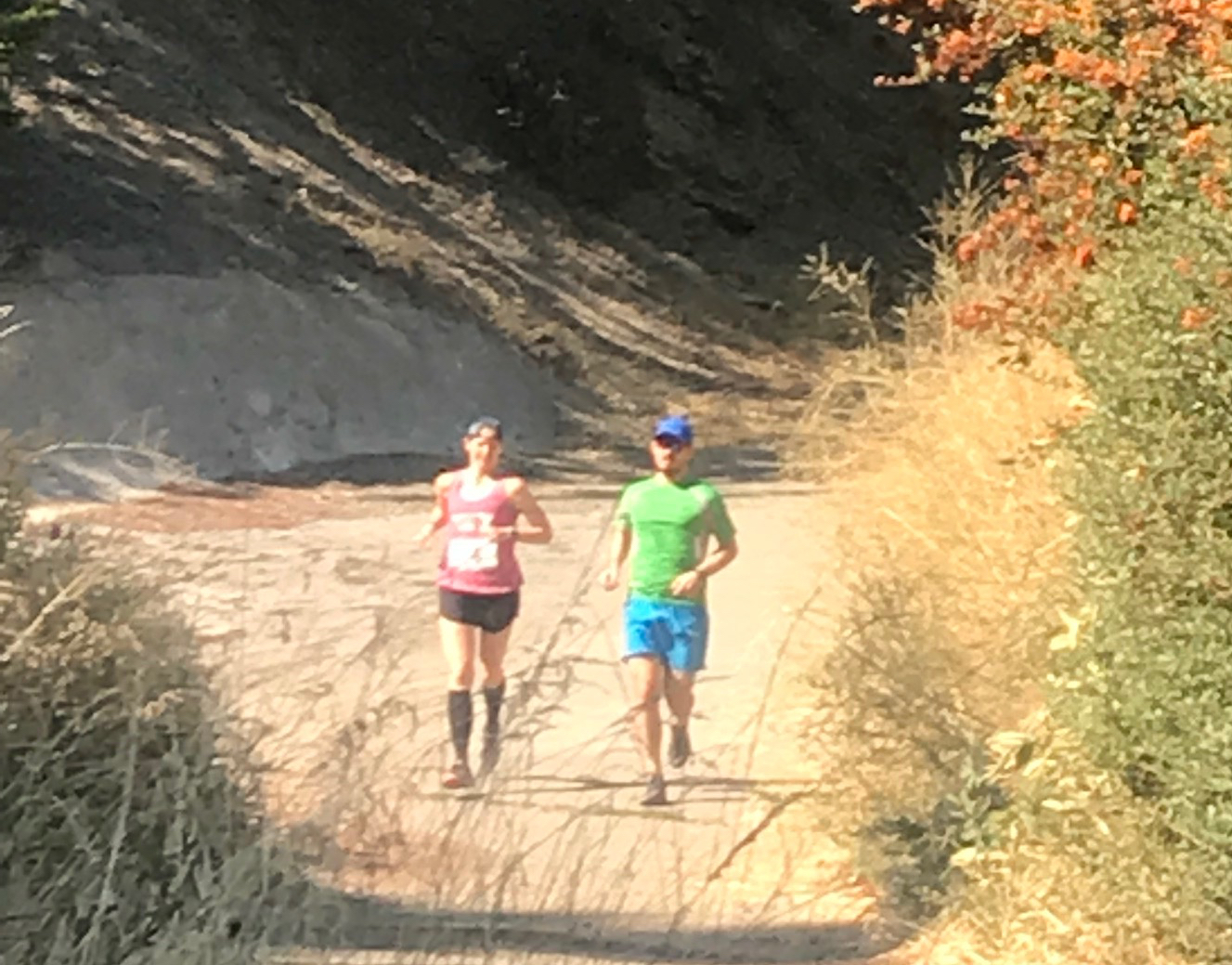 Looking back, it makes perfect sense that I became an ultra-runner. I have always loved running and being in nature, so it has never seemed like a big deal to be running or moving in a forward(ish) direction for 24+ hours straight.

I grew up on a farm and my favorite job was moving sheep from pasture to pasture. My parents would give me a bucket of grain and send me running to a new field while they opened the gate and the sheep would follow me and the grain to their new pen.

In college, running became more of a routine where I was able to take a step away from deadlines and long hours in the studio. Running along the shores of Lake Mendota in the early morning was my self-care and meditation practice before I knew what self-care and meditation were. At that time I signed up for my first marathon at the recommendation of my best friend.

Running from Self-Care to Personal Betterment

Running became even more of a self-care practice when I moved to New York City. Running along the Hudson River reminded me of my runs around the lake in Wisconsin. It was comforting and grounding.

Plus I loved running marathons. I loved pounding the pavement in training and seeing how I could push myself on race day. I loved racing to PR’s and BQ’s on good days, and learning from mistakes on the bad ones.

In New York it’s quite common to find people who love to do the same “crazy” thing that you do, but maybe they are 20 times more into it, and your perception of what is normal changes.

My peak mileage in a marathon training cycle (about 50 miles/week) suddenly didn’t seem so big when I had friends doing double that distance preparing for their longer races. At this point I had done marathon distances long enough so it became my new normal, and I wanted to feel something different.

The cool thing about distance running is that it is an individual sport and you can see the results of the effort you put in. It can certainly be done in a group, but you are responsible for your own training and growth. Your training partners or teammates can motivate you and you hold each other accountable. But ultimately, no one sits on the bench in their own training program, you are out there doing the work.

After 15+ marathons, I knew I needed to mix it up.

I signed on to pace a friend who was running the Leadville 100 mile race in Colorado. As a pacer, you are there to support your runner, keep them motivated, and keep them moving forward. This meant I would be running 40 miles–my longest run ever.

My runner and I started off into the pitch black mountains in Colorado at 9:45pm, I was adjusting to the altitude, adjusting my eyes to running with a headlamp, slowly picking my way through rocky ascents and picking up my pace on the downhills.

All this while trying to figure out how to eat, how to keep myself awake… and keep my runner moving and motivated; plus we were only a few minutes in front of the time cutoffs. 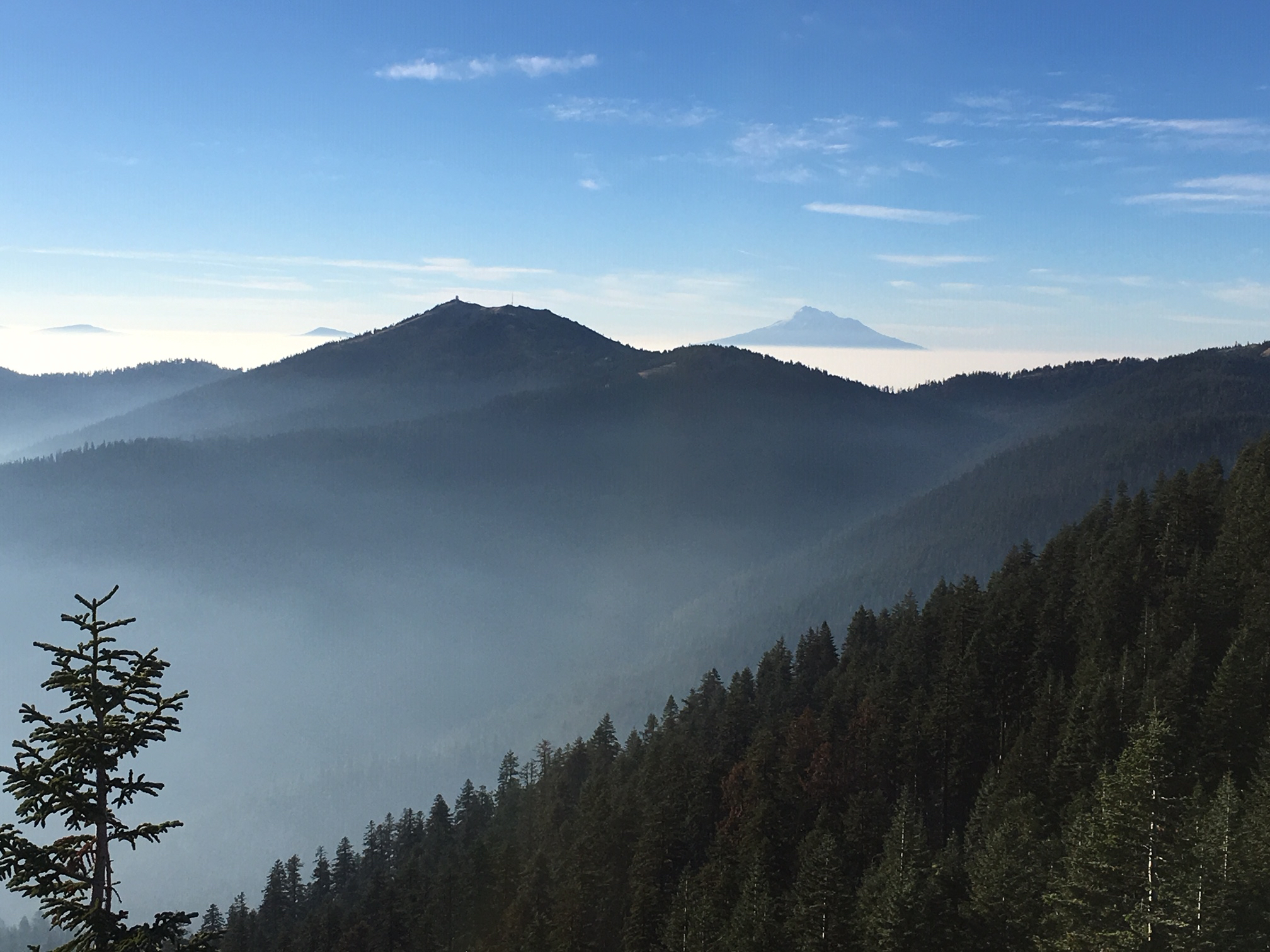 Photo by Rhonda Braun: Mile 85 in Pine to Palms 100 miler in Wagner Butte

We moved through the mountains, one foot in front of the other, some sections more rapidly than others. We watched the stars, then saw the darkness push away, and the sky became lighter and lighter. About 10 hours later, we made our way out of the trees and into the village and finish line area.

At that moment I knew one day I would do it again, but as the runner, not the pacer. I wanted the experience of covering the full 100 miles.

Cross Training with Self Myofascial Release, Meditation and Yoga

I needed to run more than I had ever run before, but I also needed to get stronger in other ways. With all the added movement, I had to figure out how to rest and recover faster. At this point, I signed up for a 200 hour yoga teacher training which lead me to Yoga Tune Up® Level 1 certification.

Many people say the first 50 miles of a 100 mile racing is all your legs, the second 50 miles is all meditation.

The meditation practice and emphasis on regeneration and self-care that I gained from completing these courses has proven to be invaluable in my training.

I signed up for my first official ultra, the Finger Lakes 50, to see what I could do.

The course was three 16 mile loops through some cow pastures in upstate New York. Midway through my third loop, I tripped. I was alone, I had been out for 6-7 hours, I was probably hungry and I just started crying. My throat tightened and I struggled to breathe normally. I realized I was sore.

I picked myself up, took some deep breaths, pulled one knee to my chest, stretching my hips. I ate some food and told myself, you signed up for this and you knew you were going to fall, this is part of your experience. For some reason, that knowledge made me feel better. I kept going.

By finishing that 50 mile race, I was able to register for the Vermont 100 mile race the following summer. Last month I finished my second 100 mile ultra: the Pine to Palms 100 miler in Southern Oregon. I’m looking forward to my next ultra and the new journey it will take me on.

While I thoroughly enjoy the repetitive motion of placing one foot in front of the other, I’ve found it is important to add varying movement (and stillness) to my training. Following are a few of my favorite self massage techniques for runners. 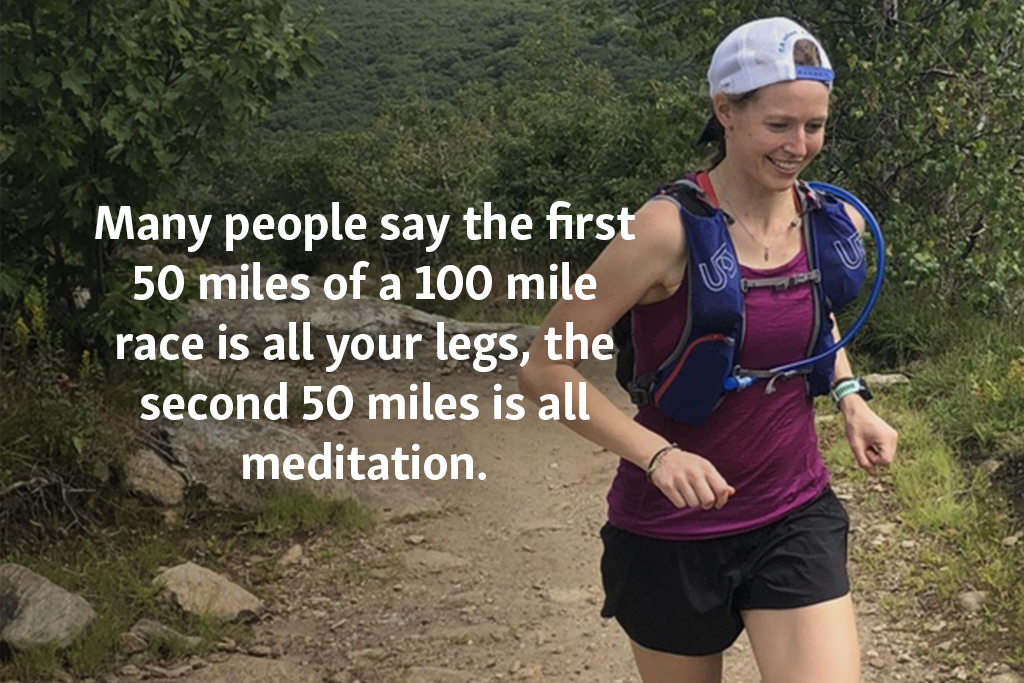 Cross Training with Self Myofascial Release, Meditation and Yoga

Legs up the wall: Lie on back and rest legs up against the wall (or a tree) to drain lactic acid, down-regulate the nervous system and create a nice end to a workout.

Roll Coregous® ball on abdomen: Lie face down on the floor with partially deflated sponge ball under abdomen and rock side to side to bring calm and ease to the body. 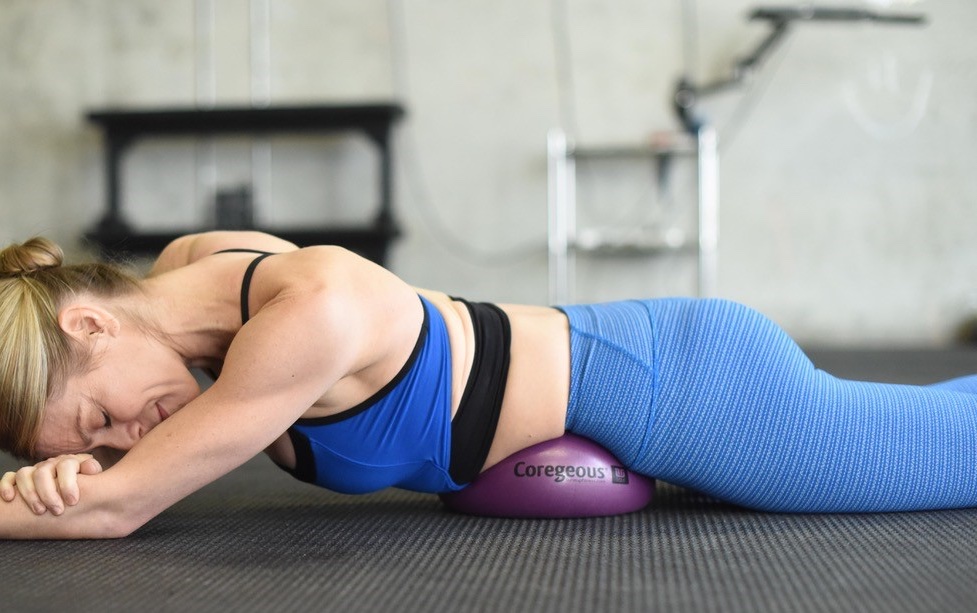 Rolling the abdomen on a Coregeous® sponge ball

Coreso leg lifts: Lie on back holding elbows overhead on the floor and alternate scissoring legs up and down for an easy core workout done in a resting position that is also very effective. Core strength is so important for running to keep your legs and body moving!

Standing knee-to-chest: Stand on one leg, pull opposite knee to chest. The compression of hip flexors goes deeper than when running, which makes it a good psoas exercise, while also stretching the hamstrings attachments.

Standing single leg hip circles: Stand, shift weight to one foot, lift opposite knee to chest, open knee to side, bring back to center, foot to floor and repeat. This is nice to open up hips and take hips out of linear forward motion out to a new range of motion.

Neck rolls: Stand tall and roll head right to left, tilting ear to shoulder. This helps move and release muscles of neck after running with a backpack for many miles. Plus it just feels nice.

Moving planks: In a plank pose, move right hand to right and right foot to right, about six inches, then move left hand and foot six inches to right so you are back in a regular plank. Continue to the right for several rounds, then move back to the left. This is another great core exercise without just being static–it gets the legs moving.

Roll out bottoms of feet: Stand foot on therapy ball and roll the ball front to back and side to side. This is a favorite to do after morning runs while at my standing desk at work. It helps open up bottoms of the feet, relieve tight calves and is felt all up through the legs. 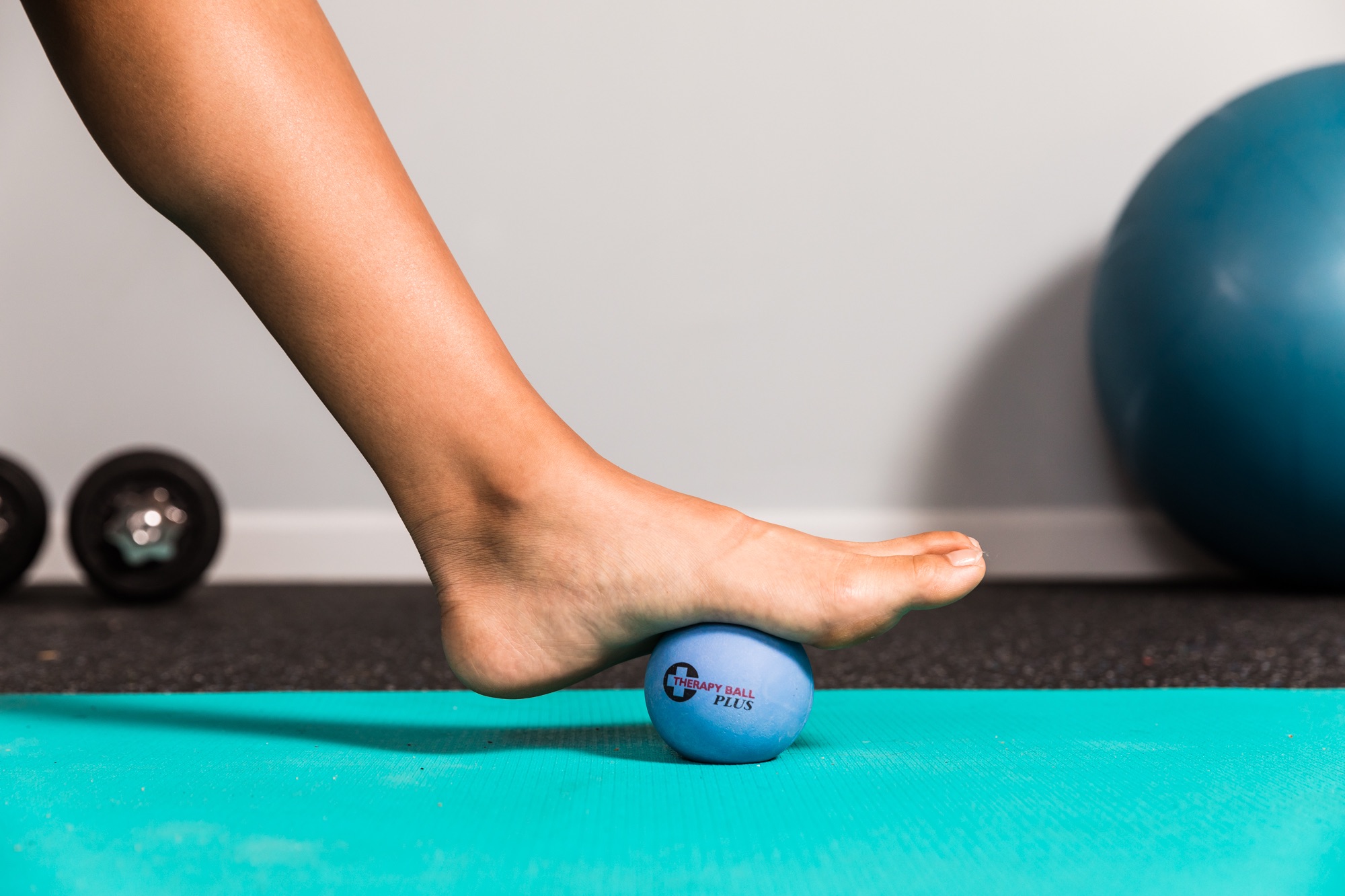 Self-massage on the sole of the foot

Liked this article? Read Training for a Big Move: Back Stability, Grip Strength and Beyond

Rhonda began her study of movement and breath as a runner. She incorporated yoga and meditation into her training as a way to balance the high mileage and mental focus required for long distance running in marathons and ultramarathons. While you won’t be doing laps around the studio, Rhonda’s classes feature a mix of strength and recovery, encouraging mindfulness and personal intention. Rhonda completed her 200 hour Teacher Training with Ariel Kiley and Yuuki Hirano at Dou Yoga in Brooklyn, and is an Integrated Yoga Tune Up® instructor. She is a also a Certified Level 1 Coach with USA Track and Field (USATF) and coaches for City Coach and Jack Rabbit running programs.

The Confluence of Pain and Pleasure: Navigating the Currents of Adventure with Squirtboat Champion Jeff Lane

Grip Strength and the Great Outdoors: Master the Power of Pulling

While I’m not a runner, it’s great to have some tips and tricks up my sleeve to help runner friends and yoga students. Also a lot of great information and just how much mental stamina it takes! Another reminder that we need to treat the whole body/mind/spirit, not just one or the other.

I am preparing for my first triathlon ! Thanks for all the tips 🙂

I have a friend that does crazy Ultras… she so needs some good self care. Can’t wait to share with her & hopefully help her to do this for herself

I am a movement coach and have many runners on my roster. Really appreciate your willingness to share your experience as a runner and I will Ben forwarding this article to all my clients who enjoy long distance running. Also appreciate the insight into helping recover faster and getting back to the pavement rejuvenated and prepared to stride it out better than the last run. Thank you

Thank you for the inspiring story. Those long races over rough terrain must take a toll on the body and I’m happy to hear that YTU helps keep you going. And a nice reminder to take care of ones feet!

Keep smiling Rhonda and enjoy all that you do. We are so proud of you!

Thanks for sharing, Rhonda! I am truly amazed my your running capabilities. I love to run as well and using breath and meditation are an integral part of my training. Running has taught me so much about how to manipulate the mind and how to face pain in my life. The key has always been through the breath. Keep going and keep inspiring!!

Liked the after running YTU poses and rolling suggestions.

This definitely becomes a self study. Bravo for balancing the components of your training.

Thanks for the reminder that taking care of our feet is so important.
And inspiring me to get back out on the trail again!

An honest and insightful story about pushing oneself outside of the comfort range and doing so with grace. It is these breakdown moments that self-care can offer our psyche the comfort and care that we need to flourish in our endeavors.

As an avid lover of the outdoors, I’m definitely going to try some of these cross training techniques. That hip opener looks DIVINE!
Best wishes on your next 100!