“Shoulder To The Wheel” – Literally!

Traditionally, “shoulder to the wheel” means to work hard or exert yourself.  While you certainly do those things when cycling, the phrase took on whole new meaning for me this year.  Bar tops, hoods, and drops could refer to an ‘interesting’ Saturday night in Manhattan… but for the purposes of this article, they are the three main placements of a cyclist’s hands on the handlebars, which clearly establish three very different body positions on the bicycle.

1.  Riding on the bar tops is an upright and fairly relaxed position (where many people are most comfortable)

2.  Riding on the hoods (the rubber thingies that protect your brake lever mechanics), moves your upper body a little lower and forward.

3.  Being in the drops takes you into a more aggressive and aerodynamic position.  This promotes greater power transfer to the legs.  I spend a lot of time in those three positions, especially on the hoods and in the drops.  Why is this important?  If you take a look at the photos below, you can see the increased flexion in my upper back as my hand position changes.  “Shoulder to the wheel” as it were.

This Fall, I raced my first triathlon as part of a relay team.  The ride was a beautiful 25-mile loop that started at Long Island Sound and headed north through small urban centers then wooded residential areas and back.  The race organizers provided a weekly training ride for participants to familiarize themselves with the course.  The weekly assignment from my trainer was to ride the course twice:  one loop with the group ride, then a second loop faster than the first. The first few miles were lovely.  Then the road conditions got progressively worse.  Mile after mile of really, really hideous pavement.  At least half the course was harsh, torn-up road thanks to a mean New York winter, a wet spring, a flood and a small thing called Hurricane Irene.  Initially, I thought “no big deal, I’ve ridden on bad pavement, it just makes it a little harder.”

I have ridden thousands of miles on the bike shown above, totally pain free, even after a Century ride.  Sure, there’s soreness and exhaustion in the working and supportive muscles:  quads, hamstrings, trapezius, deltoids, neck extensors and the pecs.  But pain is different, and during and after my very first training ride, my upper back and triceps were killing me.  The “road bang” put the beating on my wrists, triceps and shoulder girdle as never before.  It was clear that the hands, arms and shoulders/upper back are the ginormous shock absorbers between the road and the rest of your body.  So… ow.

Here’s what I figured out.  While riding in the drops:

1.  My spine is in flexion (bent forward) and my shoulder blades are protracted (separating).

2.  My upper arms are flexed and externally rotated.

3.  The elbow joint is flexed, while the lower arm bones are either pronating or supinating, depending on the hand position.  See a pattern?  Flexion, flexion, flexion!  It’s my personal Marcia Brady.

After that one ride, my rhomboids (the muscles between the shoulder blades that guide retraction) were like rocks under my skin and my triceps were actually tender to the touch.  Those muscles are the antagonists of flexion.  Which means they do the opposite of the contracting muscles, which is to stretch.  So, while riding on the the hideous pavement with the even more hideous road bang, my abdominals/psoas/deltoids/pecs/biceps/teres minor/serratus were contracting to keep my hips, shoulders  and arms in flexion.  But…my rhomboids and triceps (primarily) were stretching and therefore opened up for abuse.

After looking at the photos I tilted my head to right, Scooby-Doo style, and saw the relationship to sitting/schlumping at the computer or driving for hours.  Just a little more extreme.

So what’s a cycling yogini to do?  Reach into the YTU bag of tricks to learn yoga poses for cyclists.  I spent a lot of time on the Yoga Tune Up® Therapy Balls, especially the Upper Back Series.  First, rolling on the wall to keep the pressure light on those tender muscles.  I moved to the floor only when I thought I could manage the compression (week 2-1/2ish).  The magic move for me was to place the YTU Therapy Balls about a third of the way down my scapula, flex my arms to 90-degrees and then simply protract and retract the shoulder blades  This also got into the trapezius muscles which lay superficially to (above) the rhomboids, a two-fer.  Over time, I gently teased those peach pits out from in-between my scapulae.  For my achey-owie triceps, I also rolled on the wall, kind of like a bear scratching on a tree, just on the arms.

Then to strengthen those overstretched triceps, I added both dynamic and isometric YTU exercises.  For the triceps were:  Long Head of the Tricep, Bridge Arms, Pin the Arms on the Yogi and the Shoulder Flossing minivinis.  There was a noticeable change in how my upper body felt on the bike after incorporating that work more frequently.  I make a point of keeping this work in my personal program, and in cyclists who I work with, it has changed my performance and comfort on the bike and made recovery quicker.

Also read our post Yoga for Cyclists – Cross Training Can Help You Go the Extra Mile.

Discover the At Home Program 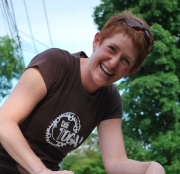 I've been a yoga practitioner for 13 years and took my 200-hour certification in 2010. I received my Level 1 YTU certification with Jill Miller in March of 2011 at the Kripalu Center. When I'm not with my husband and son, I love to geek out on anatomy and ride a road bike, really fast. Providing a science based system of total body fitness, Yoga Tune Up® has provided me a seamless bridge between enhancing my performance and recovery as an athlete. Yoga Tune Up® has also given me greater understanding of mobility and biomechanics as it relates to the practice of Yogasana. YTU inspires curiosity for me as both a teacher and student of Yoga.

Does This Blog Make Me Look Fat? How to Quell That Inner Voice

Thank you kindly, I am married to a cyclist and cant wait to give him these tools….

awesome article! I’ve started biking to work and have noticed needing to roll out my back more as well. I find myself forcing myself into a slight anterior tilt to (attempt to) bring my spine to neutral, but find this to be more irritating to my … intimate area. When this bike retires, I might consider a cruiser bike that can keep my spine neutral.

Thank you for this information. I recently took up cycling after many years away from it. I was only riding a few miles a day — about six miles to and from work, but within a week of biking I found myself having extreme shoulder and neck pain. This pain was familiar to me as it’s the same pain that had caused me to give up my yoga practice over a year ago. I was saddened, but not terribly surprised, that my pain came back while riding. I could feel that my posture seemed very wrong when I was on… Read more »

This is a fantastic article that shows how the practical application of Yoga Tune Up (particularly referring to intelligent self care and natural curiosity mixed with anatomical know how) can change your life! How often have I turned to others (physical therapists, massage therapists, chiropractors, rolfers, accupuncturists, yoga teachers, faith healers, the list goes on and on) expecting them to figure out my problems for me? There is nothing wrong with this except that it costs money, and often only helps in the short term, meanwhile I remain disempowered and helpless in my recovery process, addicted to my caregivers and… Read more »

Oh how I wish I’d had YTU balls back in my heavy cycling/triathlon days!!! I’m certain they would have changed the way I rode as well as the way I lived my life. I can only imagine what my lung capacity might have been… But I digress. Thank you for this post. I have lots of participants who faithfully hit the roads or hit the spin bikes and could greatly benefit from all of this. Next I’ll hit their ITs.

I’m studying Yoga Tune Up as part of the 200 Hour Yoga Teacher Training Course. I have recently taken up cycling and have started to feel discomfort in my neck and back. Similar to the “Neck Pain Exercises for Cyclists” article, this article is helpful in explaining how this happens and ways to help mitigate this.

Awesome post! Next to yoga the most important thing in my life is cycling. I too have put serious thought into the hand, arm, and shoulder placement while riding. While I tend to have rather week rhomboid muscles, keeping the shoulder blades pinned on my back has been a struggle for me. I also tend to have serious upper trapiezius and neck tension. I’ve found in order to avoid stress on my rhomboids, trapiezius, and neck while cycling, placing my hands on the hoods, or drops is most important insuring the external rotation of the arm bones allowing me to… Read more »

what a great article for athletes who endure much cycling and also avid spinners in the gym but also can be helpful for those weekend athletes. As they say awareness is the first step. So recognizing the chronic pattern of the body in any movement, sport or activity and noticing if you are counter balancing it with adequate stretching and or strengthening can be very helpful.

[…] elevation (think shrugging) and downward rotation of the shoulder blades.  If you read my article on cycling you will know mine live in protraction a lot of the time.  In fact, in our society of computer […]