Rancho Cucamonga, CA, United States
YTU Training Type:
Yoga Tune Up® Certification Training
Shoulders Immersion
Breath and Bliss Immersion
The Roll Model® Method Training
Email:
[email protected]
Website:
http://ginadecker.com
Gina began the practice of yoga 24 years ago. A doctor had recommended she look into yoga to gain more flexibility. She went on to teaching yoga and later to teaching others how to teach this amazing practice. Gina has been teaching in the Inland Empire since 2001. She completed her 200 level teacher training with Devi Yoga in Claremont, Ca. After completing two other teacher trainings including YogaWorks and YogaFit, Gina received her 500 level teacher training with Cloud Nine Yoga under the direction of Erika Faith.
! Gina continues to be a student by expanding her education through various workshops and yoga conferences.
! She is also a Reiki Master. Gina retired as a Deputy Sheriff in 2011 and began working full time at what she loves to do- help others. She also received her certificate as an Ayurvedic Practitioner from the American University of Complimentary Medicine in 2013. Other trainings in 2014 include Yoga Tune Up®, Aireal and Ashtanga yoga.
! Gina has experienced the healing of yoga on the mind, body and spirit and loves sharing the gift that was bestowed on her so many years ago. 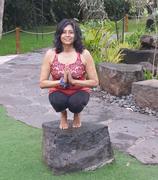