The Diaphragm: The Ripple Maker

The diaphragm is not an obscure muscle, but a central, totally essential muscle. The focus of this inquiry is the relationship of the diaphragm to the pelvic floor. The diaphragm moves in concert with the 16 muscles of the pelvic floor; like a piston moving up and down in unison. Thus the muscle which gives us oxygen, existing between the heart and lungs above and the liver, stomach, and intestines below, influences the tone of our pelvic floor and affects both elimination and reproduction.

As the top and bottom of our abdominal cylinder move, the abdominal or core muscles also are engaged. As we inhale, the transversus abdominis, multifidi, and pelvic floor release and broaden, and with the exhalation they all three contract; their activation is in sync with the pelvic floor muscles.

Your breath is a powerful pathway into your pelvic floor, and abdominal cavity! The breath is far grosser than the subtle movement of the pelvic floor; practice toning your respiratory diaphragm and your powerful core muscles, you will feel your pelvic floor catch the ripples and benefit tremendously.

Improve your core with the Coregeous® DVD

Check out the Coregeous® Ball 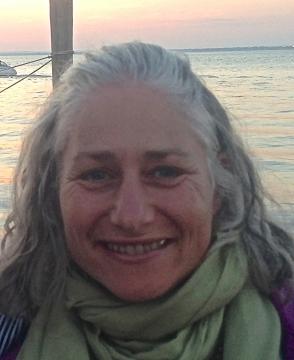 Amanda is a certified Yoga Tune Up teacher in Sebastopol, CA. Her sessions with individuals and small groups, integrate her extensive training in Iyengar and Ashtanga Yoga, as well as fitness work from CrossFit to MovNat. Amanda can be reached at [email protected]

Scalenes On The Scale: Taking The Measure Of Three Small Muscles

Great points! This means that it also effects our leg movement as well since the psoas is a main hip flexor. When singing we work a lot on the pelvic floor and the diaphragm separately, but really they should be thought of synergistically.

Wonderful explanation of the connection between the pelvic floor diaphragm and the respiratory diaphragm.

Mind completely blown! Thank you for the simplistic explanation about how these relate to each other and react to one another. So interested in this partnership! Can’t wait to learn more !

This is a great explanation of the relationship between the diaphragm and the pelvic core. I find this really hard to sense in my own body, but this breakdown makes it easier to at least envision what is going on. Thank you!

Thank you Amanda . I have learned how important the diaphragm is and the role it plays in Tubular Core .
Now I have a better understanding of it’s movement and the connection it has with the pelvic floor .

This is a fantastic visualization for a reflective time in a transition pose. I have been working on understanding this and better still, embodying this for a while and I thank you for putting it all together.

Thank you Amanda, I found your description of the diaphragm its roll in toning the pelvic floor to be clear and insightful.

This is one of my favorite blog posts that I’ve read so far. I don’t think that most people inherently connect the diphragm and, in turn, breath-work with activation and tonification of the pelvic floor muscles. It’s much more common to just associate muscles of the pelvic floor with kegel exercises. I really appreciate this perspective because it paints the broader picture of how breathing affects much much more than just your kegels and in fact affects the way you digest your food, your immune response to sickness, and of course, rudimentary actions like walking and standing.

Thank you for this description of the diaphragm and it’s link to other muscles, structures in the body. I love exploring how interconnected our bodies are in both structure and function.

fascinating. I never gave much thought to the connection between the diaphragm and the pelvic floor. I’ve recently discovered that my pelvic floor is in a constant state of contraction, and I can see now how that could affect my breathing. Thank you.

Thank you for clarifying the link between the diaphragm and the pelvis floor. Everything is interconnected!

With 1 breath activating the core and pelvic floor. I found it easier to learn the muscles with your explanation. Thanks Amanda.

This is a great article and very clearly written. I sometimes have a challenge feeling these cues. I would like to get into the breath seminar at some point. Any ideas on how to start this process or techniques that you use?

Hi Amanda, Thanks for the article, the relationship of the diaphragm to the pelvic floor is something I’ve only been recently exploring. I’ve noticed that several of my clients who have a tucked pelvis in their normal posture do not breathe well. I’m constantly trying to bring them into a neutral pelvis and recently experimenting with their breath as their posture changes627. On a different side of the spectrum for posture, would it make sense to say that if someone splayed their ribs out even a few degrees in their posture that their breathe would become more shallow and their… Read more »

Really enjoyed reading your explanation of how the diaphragm and the pelvic core are connected. Thank you for sharing your knowledge.

I just learned about all of this in Yoga Tune Up the other day! It’s amazing how significant the breath’s impact is on the rest of the body. Yoga, with its focus on breath, can have a powerfully positive affect on our overall health.

Hi Amanda, thanks for the refresher on the relationship between the diaphragm and the pelvic floor. I had no idea the multifidi relaxed in tandem with the TVA and pelvic floor on inhalation, does that mean they also contract in tandem on exhalation?

Thanks for the article – I am a singer as well as a practitioner and thinking about the diaphragm from a barrel perspective even helps with creating air through the throat so that singing can get more range. Just another application!

This was so well done! The explanation of the importance of the diaphragm in relation to the pelvic floor was revelational to me, it really inspires me to find ways to utilize our breath to pin and stretch muscles that students wouldn’t naturally link together. Thank you.

Thanks, Amanda. Even though in every class I teach various forms of pranayama, I’ve not related normal inhalations and exhalations with the contractions and relaxations of the pelvic floor muscles. What you wrote makes so much sense! I can hardly wait to add this tidbit of knowledge to my YTU classes — as well as classes I teach for students over 50.

Thank you for this great article on the relationship of the diaphragm to the pelvic floor as well as the core. Breath isn’t really thought about as a whole body connection and it should be. If our pelvic floor and diaphragm are not aligned all sorts of issues arise.

I had never really thought about the beautiful relationship between the diaphragm and the pelvic floor. This post is another of many reminders that the body functions as a fluid whole and that regarding it as such, rather than trying to break it down into disparate components, is a more natural way of understanding movement and function. Thank you!!

Thanks for this descriptive post about the function of the diaphragm and the very articulate explanation of how it is so intrinsically connected to the pelvic floor, the muscles of the abdominal cavity, the psoas and the QL. Your description of how interconnected the diaphragm is with the movement of the breath and the health of the pelvic floor really drove home the importance of practicing diaphragmatic toning. Now, on to practice a few rounds of Uddiyana Bandha! Thank you for the reminder!